On set live footage of Steven Spielberg's 'Ready Player One' 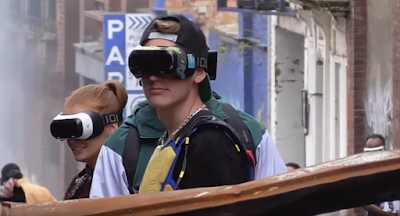 Steven Spielberg's new upcoming American science fiction thriller 'Ready Player One' is being filmed in the Jewellery Quarter in Birmingham, England. He has transformed the historic part of the city into a dystopian American future. Street signs are changed, shop fronts have been converted with photos of dollar scratch cards, and whole roads are being completely transformed. The extras showing off the huge VR goggles appear to be quite outdated. You can also see the mail/postal van being filmed racing through the smoke filled streets.