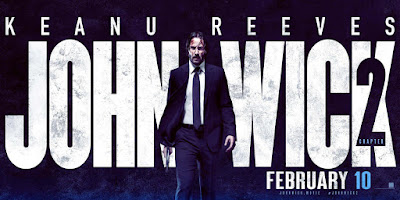 2014's cult hit John Wick was a guilty pleasure that won a lot of praise from critics and action fans alike for its intricate staging, unapologetic brutality and total lack of pretense. Nobody was claiming that this was anything other than what it was: a masterfully executed violence ballet with a very dark comic edge. It took the industry term of "killing the dog" (the moment in a screenplay when the villain does something so despicable that it becomes firmly established that not only do they deserve to lose, they must be taken down) and used it in the most literal way possible: bad guys killed former assassin John Wick's dog, therefore they must pay, and that's the movie! It was a premise that was ridiculously thin and yet sardonically sophisticated, because it let more cinematically astute viewers in on the joke. It also played a bit like an action demo reel for its director, former stunt man Chad Stahelski, and his uncredited co-director, producer David Leitch.

But in order to turn it into a franchise, it becomes necessary to move past the dog, and to create a broader mythology. In doing so, the filmmakers easily run the risk of detracting from the simplicity that made the original work so well. And John Wick Chapter 2 is definitely missing some of that goofy charm. But it's still one hell of a ride. 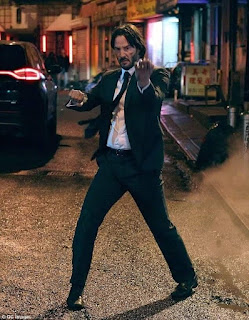 The movie opens with our titular anti-hero (Keanu Reeves) wrapping up the final loose end from the first movie, namely the retrieval of his stolen car from a Russian mafia boss (Peter Stormare, in exactly the kind of "Peter Stormare" performance one would expect from Peter Stomare.). After this eye popping, pulse-pounding and kneecap blasting sequence, John is ready to go back into retirement, burying his stash of weaponry under a fresh layer of cement and getting ready for a quiet life with his new dog. But fate has other plans, signalled by the arrival of Santino D'Antonio (Riccardo Scimarcio), the one man who truly holds leverage over Wick, in the form of a "marker" that binds them together in a blood agreement. It seems that it was through a deal with Santino that John was able to get out in the first place, and John broke a code by getting back into the game to take care of business in the last film. Because of this, Santino has the right to force John out of retirement for one last job, and then he'd be free again, as long as he takes the job. If not . . . well, let's just say It's an offer that even John Wick can't refuse, though he does try, losing his house to a bazooka in the process (but thankfully, the dog is spared.). It seems that he must fulfill his obligation to Santino, or he will never truly be able to put his old life behind him.

The action sequences are dazzling, filled with staging and choreography that is done with a level of skill and finesse that pretty much puts the competition to shame (in particular, a couple of extended fights between Wick and Cassian, an assassin played by Common, are instant classics.). Nobody puts together a fight scene better than Stahelski, and if his name doesn't come up as a contender to direct the next Bond film after this, Barbara Broccolli is making the biggest mistake of her career. But not all of the credit can go to Stahelski, of course: it takes an army to make a movie like this, and there is a lot resting on the lead soldier. It is high time that Reeves got his due as one of the great action stars in cinema.  He's got the steely intensity of Clint Eastwood mixed with a physicality that feels like a hybrid of Steven Segal and Barishnikov. There is a perfect mixture of stiffness and grace to his movements, combining agilty with brute force, that makes his fight sequences feel as real as they come. 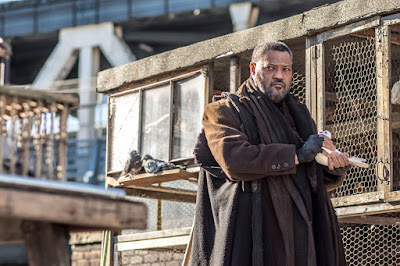 There's no denying that the story here is thin, and it's missing the emotional driving force of the original.  It largely makes up for that by being a little more overt with some of the comic elements, contrasting the brutality of the proceedings with the civility and "professionalism" of the code that these assassins live by, and Ian McShane, who has a bigger role this time around, and Reeves' old Matrix co-star Laurence Fishburne, play a big part in making that work, as do Reeves, Common and Ruby Rose as a female assassin who speaks only in sign language. There's a surprising amount of humor in the violence itself, albeit a very strange sort of humor. The inventive gruesomeness of some of the killings can be quite jaw dropping, to the point where it is sometimes played with a touch of self parody. It's very much the Tarantino style of shock value violence, except that it happens much more quickly and avoids lingering on anything and overplaying it past that initial "Ewwwwww . . ." moment.

The sequel does run just a little bit longer than the original, and the biggest problem with that is that a movie this violent eventually becomes a bit numbing. The number of head shots at close range, the sheer amount of blood, and the general lack of regard for life is certainly not going to work for everybody, and it's what makes the "guilt" in guilty pleasure such a big factor.

We certainly wouldn't want every movie to be John Wick, and it's definitely not for all tastes. But if you need to blow off a little steam, and you have a weakness for in your face action, it's something of a can't miss experience. 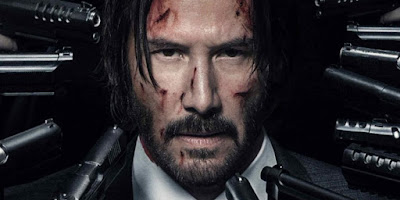