Movie Review: "The Great Wall" is Far From Great, But it's Eye Popping, Campy Fun 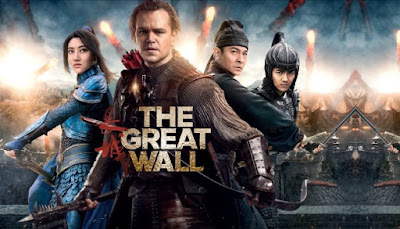 As critics, we generally get to go into a Hollywood film relatively fresh, before too much buzz has built up to give us a strong expectation as to its quality, but The Great Wall isn't a normal Hollywood movie: it's a Chinese and American production, the first big blockbuster English language film from famed Chinese director Zhang Yimou (2011's The Flowers of War, starring Christian Bale, was still considered a Chinese language film), and this fantasy epic opened in China on December 15, 2016. There's already been a good deal of press about it, and while it has done well at the box office, it has also faced some pretty harsh reviews and accusations of "whitewashing", with some feeling that putting white actors like Matt Damon and Willem Dafoe headlining a film set in ancient China with a predominantly Chinese cast was Hollywood pandering and giving us yet another "white savior" formula movie.

So, despite being fans of the director and his star, we were going into this movie with some genuine hope, but also prepared for the worst. And it most definitely is not a multilayered masterpiece: it's a silly monster movie with something of a '90's fantasy feel, a sort of Robin Hood: Prince of Thieves or even Dragonheart kind of vibe. But none of those movies were directed by Zhang Yimou, and The Great Wall still manages to be yery fast moving and quite enjoyable taken on its own merits, with some outstanding action and truly gorgeous visuals. It's not a classic. It's not even a great popcorn flick. But it's also not the total dud that many are making it out to be. 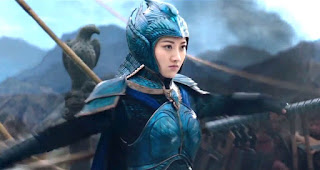 The story begins with a group of European mercenaries searching for black powder while being pursued by Khitan bandits. They take refuge in a cave, where they are attacked by a mysterious and highly dangerous predator. The only two survivors are William (Matt Damon) and Tovar (Pedro Pascal, of the Netflix hit Narcos.). William manages to slashed off the monster's arm, and two men decide to bring it with them, figuring they can always use an extra hand (rimshot.). The next day, they stumble upon the Great Wall and are taken prisoner by Chinese soldiers of a secretive military sect called the Nameless Order, which has been around for hundreds of years (you'd think during that time someone would have thrown out at least one name suggestion that would stick.). The order is tasked with guarding the Great Wall, which was conceived for the sole purpose of repelling a horde of monsters called the Tao Tei, who rise every sixty years (though despite the Emperor's campaign promises, he never did get the monsters to pay for the wall.)  The commanding officers are shocked to see the severed hand, as they believed that the next monster invasion was still several weeks away. They welcome the visitors with open arms and hero status after they prove themselves in combat, but there is a catch: they cannot ever leave.

There's no question that the plot is a bit muddled, and the characterizations are ill defined to put it mildly.  There is a pervasive cartoonish feel throughout, but that sometimes plays to its favor. Once you accept that this isn't going to be Lord of the Rings meets Red Cliff, and just go with it, there's really a lot of fun to be had. 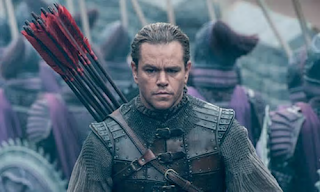 Damon fairs pretty well as the cookie cutter hero, giving us a weak but workable Hollywood period accent that wavers just a little between Irish and Northern England, but doesn't wander all over the map as some reviews wrongly suggest (actually, it plays at times like he is doing a direct impression of Brendan Gleeson, much like Robert Downey, Jr.'s Sherlock Holmes seemed to borrow so heavily from Jeremy Irons.). Far more problematic is the character itself. William's character arc happens so quickly and with so little clear motivation that it never entirely works (the film's 1 hour and 46 minute run time and rushed narrative indicates that some pretty big cuts were made.). The result is that we are never fully sold that the character was ever the ruthless and heartless mercenary we are told he was, nor that he has a strong enough reason for his drastic change, aside from a comment made by Willem Dafoe's character suggesting that William want to impress the new female General (Tian Jing.).

The banter between Damon and Pascal is quite enjoyable, in no small part due to the latter's strong sense of comic timing. The Chinese cast members are all solid, though the stoic nature of their characters limits their ability to make too strong an impression (fairing best is Andy Lau as Strategist Wang), and Dafoe is largely wasted (he played a much better weasel in The Fantastic Mr. Fox.) Given not only the number of credited writers, but the pedigree of story writers Marshall Herskovitz and Edward Zwick (Thirtysomething, The Last Samurai) and screenwriter Tony Gilroy (the Bourne series, Michael Clayton, Rogue One), and sheer potential of the premise, one would certainly think that a better script could have been hashed out, but as is often the case, too many cooks spoil the soup, and the final script feels more attributable to Carlo Bernard and Doug Miro (Prince of Persia: The Sands of Time and The Sorcerer's Apprentice.).

Ultimately, for us, Zhang's expert and fluid visual style and creativity counted for a lot (if Chinese women in blue armor bungee jumping from the Great Wall with spears to fight creatures that look like a velociraptor and a Warg from Lord of the Rings got bizz-ay doesn't do anything for you, we simply don't know what to say). Between that fact, Damon's Harrison Ford-like ability to carry an action film, and the rousing score by Ramin Djawadi, there was more than enough here to make it worth our time. It's something of a guilty pleasure, but it's hard to feel guilty about enjoying sone thing that undeniably dazzling, and the fact is that we had fun with it and will definitely see it ahain. It's a shame that it didn't embrace its Pacific Rim potential more strongly, but it's still a diverting ride (and the stunning visuals make it well worth paying extra for 3D.).