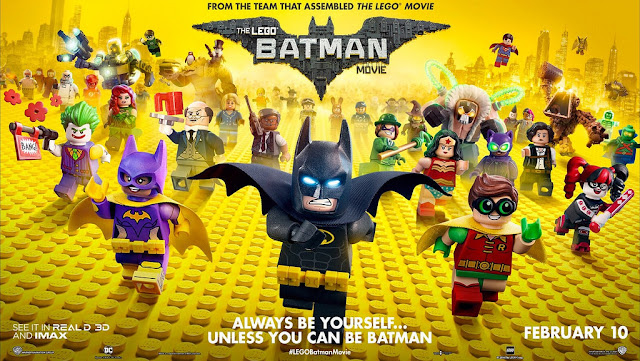 I was probably the first person to take to the internet in defense of Ben Affleck when he was cast as Batman, and I still believe that there is plenty of potential there (I love his look, and he was easily the best part of Suicide Squad.). But the charactization made necessary by the messy storyline of Batman v. Superman was a constant contradiction that ranged from disturbing to unintentionally hilarious.  It was a dark and brooding, murderously angry take on Batman that still has moments where it out-camps Joel Schumacher. As such, there was almost nowhere to go with character but up, much like George Clooney's portrayal in Batman & Robin.  But why do we fall, Bruce? So we can pick ourselves back up again. The Lego Batman Movie isn't exactly Batman Begins, but to no small extent it ends up serving the same function. 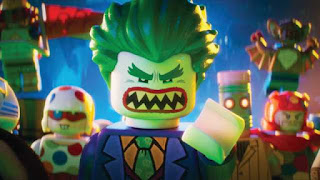 The story begins with Batman facing off against The Joker (Zach Galifinakis), who gets his feelings hurt when Batman refuses to acknowledge the clown prince of crime as his arch enemy. "I fight a lot of people," Batman explains. "I like to fight around." This refusal to validate their relationship leaves Joker crushed, and he vows vengeance on the Dark Knight. Meanwhile, Bruce Wayne is invited to attend a retirement party for Gotham City Police Commissioner Jim Gordon (Hector Eilzondo. ) At the party, Bruce meets a young orphan boy named Dick Grayson, who tries to talk to Bruce at the same time that Bruce catches his first sight of the new Commissioner: Barbara Gordon (Rosario Dawson), the gorgeous and highly motivated daughter of the former Commissioner and a graduate of "Harvard for Police." Because Bruce is so involved in his thoughts about Barbara, he doesn't pay attention to his conversation with the boy and agrees to adopt young Dick without realizing it.

While hardcore fans are probably already getting worked up about all of the origin story changes here, this is a deliberately and comically simplified version, and The Lego Batman Movie succeeds by really knowing the character and building on great themes to flesh (er, plastic) him out. While it keeps the narcissistic "I'm Batman" attitude established with Will Arnett's portrayal in The Lego Movie, it balances that with a story and exploration of what makes this guy tick that is clever and really quite remarkable, and takes on themes of relationship issues that the Schumacher and even the Burton movies bungled. Of course, it's also packed with constant laughs, which more than helps, but it fills out its run time by going for more than just a cheap and easy approach, while never forgetting its core audience. It may actually be a better repeat viewing movie than the original Lego Movie (anyone who loved that one but made the mistake of buying it for their kids, who seemed to watch it in a perpetual loop on home video, knows the painful moment when, no, everything is not awesome, in fact nothing is awesome, someone please break the television!). 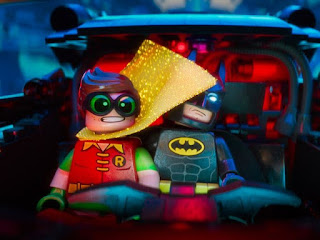 The cast is excellent, lead by Arnett, who is mostly doing his shtick but is allowed a character arc (something he rarely gets in any of his TV  or film roles.). Michael Cera really gets a chance to do something different for once, almost unrecognizable here, and Dawson frankly has one of the best voices in film as long as she isn't singing.  But the standouts are Galifinakis and especially Ralph Fiennes as by far the best take on Alfred apart from Michael Caine. Fiennes is hilariously dry but makes the surrogate father relationship play in ways that can be surprisingly touching. After the disaster of Jeremiah Chechik's The Avengers in the '90's, it's been a delight to see him come into his own as a comic actor.

If there's a major element that didn't work for me, it's a recurring joke about Jerry Maguire.  The filmmakers have to be aware that they are just recycling the best bit in The Dark Knight (in my book, the most effective pop culture reference in movie history) and dragging it out. It does serve the story, but it's always problematic to parody a great bit of comedy or satire, and it's never as funny here as it was in the classic. The time spent on the reference was a real head scratcher for me.

With that one complaint aside, this is a terrific piece of entertainment and a must see for Bat fans. Let's hope it's the first of a string of solid deliveries for DC in 2017 (it won't be, but I'm still clinging to hope, and my fingers are crossed so hard for Wonder Woman that I've broken two knuckle bones.).