Middlesbrough shopping centre feels the power of the dark side 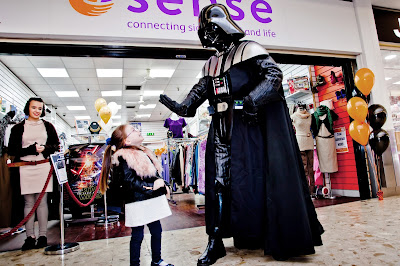 The Hillstreet Shopping Centre in Middlesbrough was the scene of an intergalactic takeover at the weekend, as Darth Vader and his battalion interacted with customers at a new charity shop. The costumed actors were there to promote an incredible prize draw exclusive to the national disability charity, Sense.

The prize is a stunning autograph book signed by the cast and crew of the iconic Star Wars franchise, donated by lifelong Star Wars fan, Neil Ellis. The 43 year-old Lucasfilm employee has spent a year collecting the celebrity signatures of the likes of Harrison Ford, Daisy Ridley and John Boyega. On May 4th, a winner will be chosen, with all proceeds going to charity.

“It’s not every day Middlesbrough gets a visit from Darth Vader. Our customers were in genuine shock. The Dark Side can’t be all bad though, they were here to promote a great cause – supporting people who are deafblind and have complex needs to live more independent lives.”

The autograph book, which also includes Mark Hamill, Carrie Fisher, Anthony Daniels and Kenny Baker from the original series, and new series’ directors Gareth Edwards and Rian Johnson, is displayed in a spectacular handmade ‘Millennium Falcon themed’ bronze-cast. It has already raised over six thousand pounds for the charity.

The costumed actors were from the 99th Garrison, the UK's largest independent Star Wars non-profit costuming group. They kindly donated their time for free.

To enter the prize draw and have a chance of winning the autograph book, the public are encouraged to make a minimum donation of £5 in any Sense charity shop across the country, or online through Neil’s fundraising page https://www.justgiving.com/fundraising/Autograph-Book 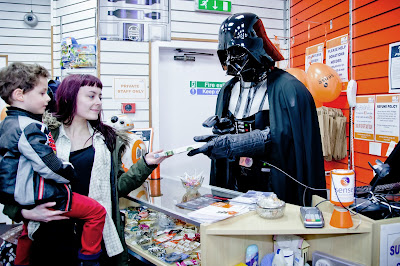