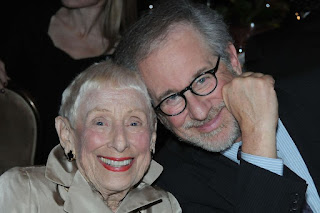 Born Leah Posner, she married Arnold Spielberg in 1945, and a year later gave birth to her first child, Steven. While Arnold was a pioneering electrical engineer, Leah, a concert pianist, was the artist of the family, and it was she who encouraged young Steven's passion for filmmaking. The closeness of their bond was evident in Spielberg's films, particularly his earlier work, as the mother was often portrayed as a figure of great strength and love. Consider these examples:

Something Evil: In Spielberg's early made-for-television movie, the story of a young boy possessed by an evil spirit, the father figure portrayed by Darren McGavin is largely clueless to the problem and ineffectual in solving it. It is the determination and love of the mother, played by Sandy Dennis, that saves their son.

Close Encounters of the Third Kind: Single mother Gillian Guiler (Melinda Dillon) lets nothing stop her from finding and bringing back her son Barry after he is taken away by aliens.

Poltergeist: Diane Freeling (Jobeth Williams) may be the quintessential Spielberg mother. Diane's love and bravery are enough to march almost literally into hell itself to save her daughter, and in the film's climactic sequence it is Diane who is called upon to save the children from the Beast.

E.T. - The Extra Terrestrial: Elliott's mother, played by Dee Wallace, is more a figure of sympathy than heroism, but this is the most overt depiction of the divorce that so shaped Spielberg's life.  There is great tenderness is the depiction of the mother struggling to raise three children by herself, and in the bond between parent and child.

The Color Purple: One of the most emotional moments in an emotional film is Celie (Whoopi Goldberg) being reunited with the now adult children who were taken away from her.

Indiana Jones and the Last Crusade: Indy's late mother is spoken of only briefly, but it's clear that he was much closer to her than to his distant father, and that the two men felt lost on how to deal with each other without her.

Hook: Moira Banning is clearly the head of the family, and the one on whom the children rely emotionally. When Peter is unable to reach the top of the mast to save his children, daughter Maggie opines "Mommy could do it."

A.I. - Artificial Intelligence: The love between mother and son is one of the dominant themes of the film. In fact, an argument can be made that it represents the essence of being human, as robotic child David Swinton (Hayley Joel Osment) travels an often nightmarish future world to become "real" and be reunited with his adoptive mother Monica (Frances O'Connor).

War of the Worlds: Mother Mary Ann (Miranda Otto) is the strong guardian and comforter for children Robbie and Rachel. She knows everything about her children and how to take care of them, while their immature father Ray (Tom Cruise) barely knows them. When aliens attack, the immediate goal becomes to find Mary Ann and bring the children back to her.

Munich: While the father of Avner (Eric Bana) is a heroic figure who looms large over the film, his mother (Gila Almagor) seems a larger presence in his eyes, and a dramatic moment in his character arc involves Avner speaking with her after the mission is completed.

War Horse: Like so many other Spielberg protagonists, Albert Narracott (Jeremy Irvine) is distanced from his father but has a close relationship with his strong-willed and understanding mother (Emily Watson).

The BFG: The ultimate symbol of Sophie (Ruby Barnhill) finding happiness in her new life is her adoptive mother, Mary (Rebecca Hall).


This, of course, barely scratches the surface of Leah Adler's influence on her son's cinematic legacy. In a statement from Spielberg's Amblin Partners, Leah's love and compassion were mentioned as defining characteristics. Whether it comes in the form of a friendship between a young boy and visitor from another planet, or saving the lives of 1100 people from the horrors of the holocaust, that love carries over to her son in his films, and the world is better for it. 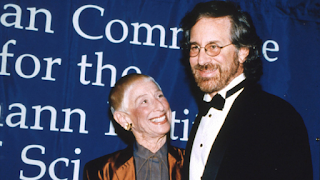