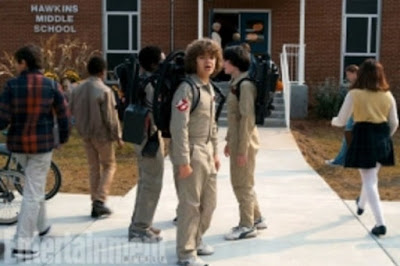 We all loved Stranger Things with all its 80's retro goodness and that Spielberg feel (You can read our review of season one here.)  Season two is just around the corner and it's still set in the 80's, this time 1984.  To tease us and whet our appetite EW released this photo of the gang dressed in Ghostbusters outfits.

In the photo we see Dustin (Gaten Matarazzo), Mike (Finn Wolfhard) and Lucas (Caleb McLaughlin), who are all dressed as Ghostbusters (The movie came out in 1984.)

Season 2 will hit Netflix later this year consisting of nine episodes.  The title of those episodes are:

Check out our fun facts on Stranger Things.