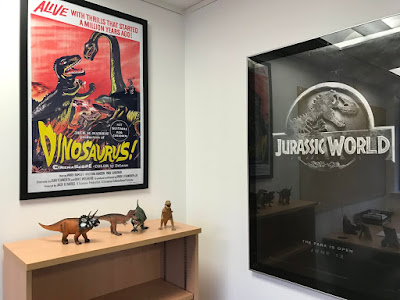 Producer Frank Marshall has tweeted this dinosaur heavy photo with the words "My office in London up and running. And so it begins..."  This of course is reference to the sequel to Jurassic World which I'm guessing is an  announcement that production has started.  The movie is set to be released in the summer of 2018.

Last week we reported that the sequel will be filmed in Wales, UK

In case you were wondering about that poster on the left.  That's the 1960 sci-fi movie, Dinosaurus!  Here's the wonderful trailer.