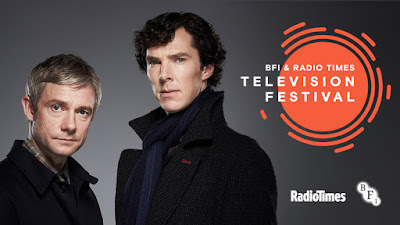 The BFI and Radio Times today announce the full line-up for the BFI & Radio Times Television Festival, celebrating the current golden age of TV with more than 40 events featuring some of the biggest names on the small screen. The new events announced today include the stars, writers and producers of some of the biggest TV shows of the year; including The Crown, Victoria, The Night Manager, Line of Duty, Poldark, Sherlock, Black Mirror and Strictly Come Dancing. Joining the line-up of TV stars is acclaimed director Sir Ridley Scott, who will be in conversation following a screening on Saturday 8 April of The Author of Beltraffio (TF1 1974), a precious gem which has recently been rediscovered by the BFI National Archive, and was directed by Sir Ridley’s brother, the late Tony Scott. This TV drama has been unseen since its UK transmission in 1976 and stars Doctor Who’s fourth Time Lord Tom Baker.

Other highlights announced today include:

IN CONVERSATION:
·         Dame Maggie Smith will make a rare appearance onstage on Saturday 8 April; the legendary Downton Abbey actor will reflect on her life on stage and screen.
·         The satirical writer and broadcaster Charlie Brooker will talk about his work including Screenwipe, Dead Set and the award-winning Black Mirror as well as his TV influences on Sunday 9 April.
·         Comedians Lee Mack and Barry Cryer have spent many years writing sketches and sitcoms for television; join these two giants of comedy on Sunday 9 April as they discuss their craft and comedies past, present and future.

PANEL DISCUSSIONS:
·         Opening the Festival on Friday 7 April will be an event dedicated to Maigret starring Rowan Atkinson. Atkinson will be joined by exec producer John Simenon, son of original Maigret creator Georges Simenon, to talk about bringing the enigmatic sleuth to the small screen.
·         A panel discussion about Netflix’s lavish drama The Crown with executive producer Stephen Daldry, Claire Foy, who plays the Queen, and more cast and crew TBA will take place on Saturday 8 April. The discussion will offer audiences an insight into the making of this majestic drama which recently won Golden Globes for actor Claire Foy and for Best Drama.
·         On Saturday 8 April Victoria stars Jenna Coleman and Tom Hughes will take a break from filming the second series, along with writer-creator Daisy Goodwin and executive producer Damien Timmer, to discuss ITV’s Sunday night hit drama.
·         The compelling adaptation of John le Carré’s book The Night Manager became one of the TV highlights of 2016; on Sunday 9 April Oscar®-winning directorSusanne Bier, executive producers Simon Cornwell and Stephen Garrett, and cast member Alistair Petrie will explain how they created such brilliant water-cooler TV that kept us on the edge of our seats.
·         On Saturday 8 April there will be a special Poldark event, with the drama’s leading man Aidan Turner, writer Debbie Horsfield and executive producer Damien Timmer. Audiences will also get a glimpse of series three, due to be aired this autumn.
·         On Sunday 9 April join Doctor Who executive producer Brian Minchin, and cast members to talk about the joys and challenges of making the world’s longest-running sci-fi series. With a sneak preview of clips from the upcoming series, set to be the last full series for Moffat and for star Peter Capaldi.
·         Moffat’s other worldwide smash for the BBC is the marvellous re-imagining of Arthur Conan Doyle’s great detective Sherlock, co-written and co-created by Mark Gatiss and exec-produced by Moffat’s wife Sue Vertue. An event on Sunday 9 April will see a discussion of the compelling sound of Sherlock with Gatiss and Vertue along with composers David Arnold and Michael Price.
·         Join writer Jed Mercurio and members of the cast of Line of Duty on Saturday 8 April as they discuss the latest series of the compelling drama as it moves to BBC One and the dark word of AC12 and police corruption.
·         Meet the unsung stars of Strictly Come Dancing on Saturday 8 April; executive producer Louise Rainbow, talent executive Vinnie Shergill, director of choreography Jason Gilkison and head of costume Vicky Gill are some of the team responsible for putting together the glitziest programme on TV.
·         On Sunday 9 April athletes Libby Clegg and Susie Rogers will be joined by comedian and Last Leg host Adam Hills to discuss how Channel 4’s exciting, dedicated coverage of The Paralympics has -changed public attitudes towards those who are physically different.
·         Join the country’s best-loved wordsmith Susie Dent on Saturday 8 April as she vacates Countdown’s dictionary corner to take audiences on an entertaining and informative journey across the rolling landscape of the English language.

MASTERCLASSES:
·         How to Become a Social Media Star on Saturday 8 April with guests Joe Wicks (The Body Coach) and the Hemsley Sisters (Hemsley + Hemsley), will reveal how they turned themselves into lifestyle gurus, TV presenters, and social media stars.
·         BAFTA-winning writer Jack Thorne will give a masterclass on Sunday 9 April, speaking about his influences and work at the forefront of British TV’s current golden age including National Treasure, Skins, Shameless and The Fades and his forthcoming adaption of Philip Pullman’s His Dark Materials for the BBC.

TREASURES FROM THE BFI NATIONAL ARCHIVE:
·         Sir Ridley Scott will be in discussion following a screening of his brother Tony’s TV drama Author of Beltraffio (TF1, 1974) which has remained unseen since its UK transmission in 1976. This drama was the British contribution to a five-part series of Henry James stories made for French TV in 1974 and stars Tom Baker.
·         The Festival programmers have plundered the BFI National Archive to put together a collection of memorable moments from Tom Jones’ outstanding ATV series This Is Tom Jones (1969-1971); on Saturday 8 April audiences will be able to revel in clips of special stars such as Dusty Springfield and Stevie Wonder performing one-off duets with their host.
·         TV Dinners with Tom Kerridge on Saturday 8 April will celebrate larger-than-life cookery stars such as Fanny Cradock and even Vincent Price, bringing us up to date via Mary Berry and Delia Smith with clips drawn from the BFI National Archive and hosted by the Michelin-starred chef and TV cookery star Tom Kerridge.

FAMILY EVENTS:
·         On Sunday 9 April there will be a preview of two brand new episodes from CBBC’s top football drama Jamie Johnson. Hear from the writers, selected cast and crew, plus a special celebrity guest, after the screening.

The BFI & Radio Times Television Festival is set to be the largest and most prestigious public television festival in the UK. The festival will be an unmissable occasion for lovers of the small screen with more than 40 events, including talks with some of the biggest names in broadcasting; exclusive UK and international previews; rare archive screenings; book signings; family programming; a fiendishly tricky TV quiz, and much more besides.