Oscar's Forgotten: Why a Great Film From Martin Scorsese Failed To Get Recognized

There are a few things that can be consistently counted on from a Martin Scorsese Picture. One is technical and visual excellence. Another is that it's not likely to pull a lot of punches.

But perhaps the two hallmarks that stand out to me most of all are that Scorsese the artist is almost always trying to say something meaningful, and that unfortunately, too often he does not succeed. In some cases, such as The Wolf of Wall Street, the problem is that we just don't need a three hour movie to make the point that greed and lust can be self destructive. We got that in the first hour (frankly, we got it in the trailer. Not that Wolf is without merit; it has some moments of brilliantly executed comedy, and it's filled with great acting and staging. But ultimately that wasn't nearly enough to make the hollowness and full on assault of debauchery worth it for me.). In the case of Gangs of New York, the pet project that took decades to get to, there were so many thoughts brewing inside the director's mind but they never formed into a coherent point; in other words, the director himself seemed to be unclear what he was trying to express (it played more like a drunken wedding toast than a movie.). Yet both of these films got recognized by the Academy, if for no other reason than that they were made by Scorsese. The one time he actually walked away with a statuette was for The Departed, a terrific and spirited popcorn flick that was completely comfortable with just being a gangster picture and not even trying to say anything at all, so much so that it's developed a bit of an undeserved resentment. 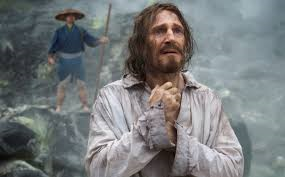 But in 2016, Hollywood's number one film scholar, one of the most thoughtful and reflective minds made one of finest acheivements cinema, only to find it all but ignored. The reason? Perhaps because it was too thoughtful for comfort. In order to examine the film, some spoilers are necessary. You've been warned.
behind a camera, found a piece that challenged him artistically, philosophically and spiritually, and he dug down deep and created something genuinely profound. The result was a dismal failure at the box office, and a singular nomination (for cinematographer Rodrigo Prieto.). How is it that someone so beloved in the industry fails so spectacularly to get recognized for one of the best films of his career? Clearly it's not a bias against religious themes, what with Mel Gibson being welcomed back into the fold like the Prodigal Son. The answer may be that Scorsese's movie is so challenging for audiences as well, asking some very deep questions without attempting to answer them. Put simply, it was

Silence, based on the acclaimed 1966 novel by Shusaku Endo, tells the story of two young Portugese Jesuits, Sebastião Rodrigues (Andrew Garfield) and Francisco Garupe (Adam Driver), who head to Japan after receiving word that their mentor Father Ferreira (Liam Neeson), has renounced  his faith after being tortured. The two young  missionaries set off to find him, refusing to believe this story. (Yes, that's right - Peter Parker and Kylo Ren go to Japan to look for Qui-Gonn. Now, stop that and try to go deeper!).

Upon arrival at the Japanese village of Tomogi, the priests are surprised to find the local Christian populations driven underground. They eagerly welcome the priests, who administer long-awaited sacraments to them. A samurai searching for suspected Christians, whom the villagers refer to as "The Inquisitor", straps some of the villagers to wooden crosses on the beach and places them in the ocean, where the tide eventually kills them. The bodies are then cremated on a funeral pyre so that they cannot be given a proper Christian burial 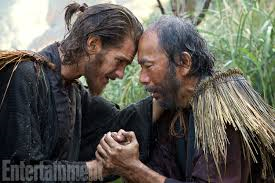 From here, the story primarily follows Rodrigues as he tries not only to discover the truth about Ferreira, but to protect the Japanese converts who are willing to lay down their lives to keep him there, thirsting for the teachings and sacraments of the Holy Church for which they are being persecuted. But as Rodrigues sees these faithful people suffering so brutally for their faith, he begins to struggle with questions, such as: why does a loving God let his faithful children suffer? Why do his constant prayers seem to yield no response? And most of all, how can ask these people to stay true to a God he himself is beginning to doubt, and who seems to have forsaken all of them?

Scorsese describes himself as "a believer with doubts,"and honestly, an ability to understand and appreciate that point of view may be essential to embracing the film, and could be where it lost so many people. While Gibson's Hacksaw Ridge follows Andrew Garfield risking his life for an unwavering faith that tangibly wins him the respect and love of his comrades, and brings him closer to his God, Silence shows the same actor devoting himself to God just as fervently, but facing trial after trial and wrestling with his own confusion and frustration. It's not the fact that Rodrigues has doubts that may be so hard for many to understand, but rather the fact that he presses forward anyway and never loses his love of God and constantly endeavors to do His will, even when questioning His presence. And when Rodrigues is finally reunited with his mentor, he finds the older man only to eager to break his spirit. But has Ferreira truly lost his religion, or is he merely trying to survive? And has God forsaken them, or has he been silently present all this time, suffering with them? Rodrigues is faced with a choice: renounce God and save the lives of the Christian converts, or endure to the end and let these people die. But would they be dying for the glory of God, or for the glory and pride of Father Rodrigues'? The young Priest is quite literally faced with the question: what would Jesus do?

The most truly thought provoking films do not attempt to give easy answers to complex questions, and Scorsese and his co-writer Jay Cocks leave much up to the viewer to determine for themselves. If you want to be told what to think, you're better off with Hacksaw Ridge (which is a very good film, but a simple one that plays it safe.). But if you want a mesmerizing experience that will make you ponder the nature of God and man's quest to understand (or determination not to believe), Silence will challenge your mind. For me, a believer with questions and sometimes doubts, it was a faith affirming experience, while others may walk away certain that the film is about the futility of trusting in God. And that balance between what you take away from a movie and what you put into it is the essence of art.