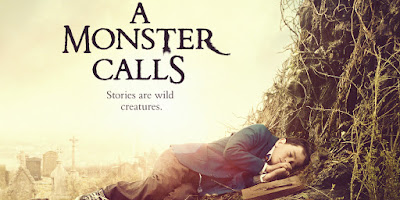 A MONSTER CALLS
Starring Lewis MacDougall, Sigourney Weaver, Felicity Jones, Tobey Kebbell
and Liam Neeson as the Monster
Based on the book by Patrick Ness from an Original Idea by Siobahn Dowd
Screenplay by Patrick Ness
Directed by J.A. Bayona

For starters, we have to emphatically state that, despite the increasingly low quality of his recent action films, any movie that includes the credit "and Liam Neeson as the Monster" is automatically a classic. But for director J.A. Bayona's extraordinary new offering A Monster Calls, that's just the tip of the iceberg. The director of The Impossible and the scheduled follow up to Jurassic World has fashioned a masterpiece that is both heartbreaking and uplifting. 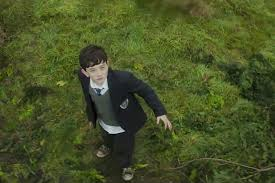 Conor O'Malley (Lewis MacDougall) is a 13 year-old boy who has a bully problem. At school, he is the target of a gruff older boy who taunts him and occasionally roughs him up, a  home he is facing two seeming bullies: one is in the formidable form of his stern grandmother (Sigourney Weaver), who is there so frequently because of the biggest bully of all - terminal cancer - which has it in for Conor's mother (Felicity Jones.). The last and strangest bully is a tree outside the house by day, but by night, it figures into his frequent nightmares, and eventually becomes a giant monster. The monster is the one bully Conor seems to know how to stand up to, and it turns out that he may be there to help the boy. The Monster informs Conor that will share three stories, and that Conor will then tell him one. 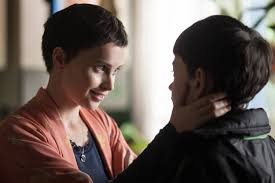 This is a deeply emotional movie, troubling at times, and profoundly sad. But it's also
completely sincere, and hopeful in every way it possibly can be, and that's what makes it a drama rather than a weepy. The cast is terrific, starting with young MacDougall, who gives a performance filled with a surprising amount of nuance for an actor his age. And while this may be Felicity Jones' smallest movie of the holiday season, it's also the one that proves her to be more than just the it girl of the moment, and she should be considered for major award nominations  Sigourney Weaver's accent is not very convincing, but she brings so much gravitas to the role that it's hard to fault it. There's something about seeing Ellen Ripley as the stern Grandma and the helpless mother watching her child die, in a movie where the greatest comfort comes from a monster, that really plays. And Neeson is nothing short of glorious as the enigmatic monster (both in his voice and motion capture performance), lending the film a raw power that no one else could provide.

If skill is what makes a good director, then the choices made with the material are what a great one, and Bayona proves himself on every level.  The film utilizes live actin, C.G.I., Motion Capture and other forms of animation, and most directors would have given in to the temptation to get far more self indulgent with these stylistic opportunities, but Bayona never loses sight of the fact that at its core, this is a human drama. All of the various elements serve the story, never the other way around.

A Monster Calls is a great film well worth your time, but be prepared to cry. We can only wonder whether the next installment in one of our most treasured franchises will allow Bayona to use his strong gift for emotion and three dimensional characters. Considering his seeming inability to tell a story without depth, his Jurassic outing is a mouth watering prospect (especially if you are a carnivore.).