Movie Review: "The Founder" Serves up a Compelling Story with Side Order of Great Acting 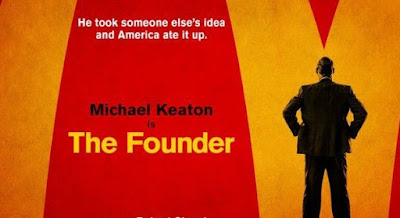 
When I was a pre-teen, I remember attending a party where a friend told the following story:

"So, did you know that McDonald's was started by two brothers, Mac and Dick McDonald, and that the Big Mac was originally going to be called The Big Dick? Isn't that funny?!"

My brother, ever the trivia king, questioned this: "That can't be true," he stated. "McDonalds was started by Ray Kroc."

This was before the internet, so there was no immediate way to settle this, but we'd seen the signs telling of Ray Kroc's ingenuity at many a McDonalds location, though we wondered from that day on where the McDonalds name actually came from. Well, it turns out that, of course, the Big Dick is indeed an urban legend, but Mac and Dick McDonald were not only very real, they were American visionaries who literally invented the fast food industry. Which begs the question: who was Ray Kroc? 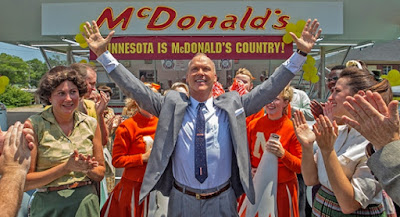 The Founder tells the story of Ray (Michael Keaton), a struggling traveling salesman in 1950's America, whose current area of focus is Prince Castle brand milkshake makers. He has a supportive wife (Laura Dern) and has amassed enough money to live a comfortable, if simple, life, but constantly craves more. So when a small diner is ordering an unusually large number of milkshake makers from his company, Ray is intrigued, and he decides to go visit the enterprise in question. What he finds is a highly popular joint by the name of McDonald's. It's not a drive-in, or a dine--in restaurant: this is a place where you simply walk up, place an order, and it comes to you in less than a minute. Ray is awestruck by the fast service, the high-quality food, the novelty of disposable packaging and the family-focused customers who regularly visit this establishment.

Ray meets with the two brothers who own and operate the place, hard-working Maurice "Mac" McDonald (John Carroll Lynch) and the resourceful and imaginative Richard "Dick" McDonald (Nick Offerman.). The brothers have quite a tale: how they grew up poor, had dreams of going to Hollywood, were struck by the Depression, started their own hot dog stand and gradually expanded the traditional business model to create an astonishing model of efficiency that caters to the needs of the consumer at a low cost without sacrificing quality. Sensing an opportunity, Ray shows up the following day to tell the boys that franchising the store is a must, and moreover, he is just the guy to make it  happen.

You may be thinking that just because your kids like Happy Mealsk doesn't mean you want to watch a movie about how it all began, and that it can't possibly be that interesting. You'd be wrong.

The Founder is more than just the story of McDonalds. It's a story of power plays, hidden agenda and strange alliances: really, it's Game of Thrones with burgers and milkshakes in place of dragons and breasts. It's the story of the so-called American dream, and just how easily that dream can be perverted. While Ray Kroc does some astoundingly rotten things to these two good-hearted souls, and eventually builds a empire on their backs, there's no denying that he genuinely is a man of vision. And by far the most disturbing aspect of this sordid story of backstabbing and blind ambition is discovering to your own horror that a big part of you is rooting for the bad guy.

Keaton is dynamite, capturing the complex mixture of tenacity, heart, ruthlessness and blatant self aggrandizement that is Ray Kroc, and Hollywood's long awaited realization that he's comparable to Tom Hanks is a great thing. But fittingly, it's the brothers that make the movie. Lynch and Offerman are so endearing and genuine that it is really quite heart breaking to watch sometimes, and yet their stubbornness can be maddening. Director John Lee Hancock portrayed a similar dynamic with Walt Disney and P.L. Travers in Saving Mr. Banks, and while The Founder never reaches that level of emotion or depth, it's a fascinating tale (and the similarities between Walt and Ray are more uncomfortably there than most Disney fans, myself included, might like to admit.). Dern gives a solid supporting turn as Ray's unappreciated wife, and B.J. Novak (who also appeared in Mr. Banks) adds his unique, oily charm to the role of the financial whiz who figured out how to pull this whole thing off.). The movie moves briskly, never giving you a chance to get bored, and you will leave the theater desperately craving a burger and fries even if you feel guilty ever times you stop at the Golden Arches for the rest of your life.

So, you're probably not going to spend money to see a movie about McDonalds in a theater. I get that. It just feels . . . weird, especially when Rogue One is still playing and you still haven't caught La La Land yet (and why not?). But if you can get past that awkward feeling, and the fast food mentality that you want to spend your money on something safe, tried and true rather than daring to try something truly different, you will leave very glad that you took that chance. This is an involving and unique drama that makes you think, and the lesson in ethics will stay with you for a long time. 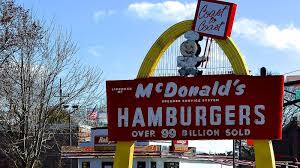