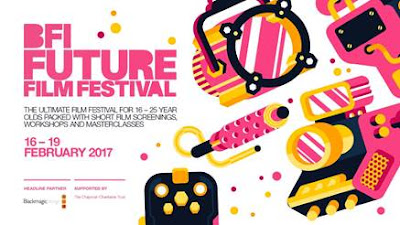 A decade after it began, the Festival will welcome back alumni to speak about how their careers have developed thanks to this unique and important event

The most important film industry Festival for young filmmakers in the UK, the BFI Future Film Festival returns to BFI Southbank from 15-19 February to celebrate its landmark 10th birthday, with tickets on sale now at www.bfi.org.uk/futurefilm. The Festival is open to 16-25 year olds, and aimed at those aspiring to develop careers in the film and creative industries. It is programmed around three key areas: ‘Storytelling’, Production and Craft Skills’ and ‘The Business of Film’, and offers young people a unique opportunity to obtain access to industry professionals alongside a wealth of talks, masterclasses and networking events. Festival highlights from this year’s programme will include practical masterclasses, Q&As and keynotes with producer Rebecca O’Brien (LOOKING FOR ERIC, I, DANIEL BLAKE), directors The Blaine Brothers (NINA FOREVER) and Mania Akbari (FROM TEHRAN TO LONDON, 20 FINGERS) and cinematographer Ben Davies (DOCTOR STRANGE, GUARDIANS OF THE GALAXY).

Since its inception 10 years ago the BFI Future Film Festival has grown from a fledgling 2 day event with just a handful of workshops to become the UK’s most important film industry Festival for young people. Over the past decade the Festival has nurtured up-and-coming UK talent who have gone on to great success both in the UK and internationally. Festival success stories include BAFTA-nominated director Charlotte Regan (who is also a BFI Film Academy graduate), whose short STANDBY is up for Best British Short at this year’s BAFTAs; Shola Amoo, a long time Festival attendee whose debut feature A MOVING IMAGE played in the BFI London Film Festival in 2016; BIFA award-winning director Rob Savage whose latest short DAWN OF THE DEAF will play at this year’s Sundance Film Festival; Alex Shipman another BFI Film Academy graduate and regular at BFI Future Film whose short documentary BAM BAM screened at the 9th BFI Future Film Festival and is now being developed into a feature film; and Ross Hogg and Duncan Cowles who after winning a BFI Raw Award in 2016 for their experimental short ISABELLA, also went on to win a Scottish BAFTA for the film. This year many of our past winners and Festival alumni will be returning as guest speakers who will discuss how the Festival has helped them on their journeys to become professional filmmakers.

This year the Festival is delighted to welcome its inaugural Headline Partner Blackmagic Design, one of the world's leading innovators and manufacturers of creative video technology. Blackmagic are supporting a number of special events across the Festival, powering our new ‘Backstage’ at the Future Film Festival space and presenting a brand new Future Film Lab Award in recognition of the best new talent at the Festival.

This year the Festival has received over 2,300 short film submissions by young filmmakers aged 16-25, the largest ever number since the Festival launched in 2007. 57 films have been selected for screening over the course of the Festival, with more than £25,000 worth of prizes set to be given to some of the most exciting emerging young filmmaking talent at the Future Film Festival Awards ceremony on Sunday 19 February. This will include the new Future Film Lab Award, supported by Blackmagic Design, which will include £5,000 towards a new film project as well as access to digital film cameras and software. In addition, the winner will also gain access to industry mentoring from writer, director and producer HaZ Dulull and his production company Sector 99.

The first day of the Festival on Wednesday 15 February is an industry day specifically for the filmmakers whose work has been selected to screen in the Festival; the day will offer bespoke mentoring and networking opportunities as well as the chance for them to screen their films to their peers. From Thursday 16 February – Sunday 19February there are four days of public events and workshops to meet ever increasing demand, and offer attendees the chance to experience as much as possible. The Festival is open to everyone aged 16-25, with ticket prices (from £10 per day), kept to a minimum so that everyone has a chance to attend.

Each day of the Festival from Thursday 16 February onwards will be kicked off by an inspirational keynote speech from a woman working in the industry. The speakers will be NINA FOREVER Producer and WFTV Chair Cassandra Sigsgaard, Grace Ladoja the Director behind the music video for Skepta’s SHUT DOWN, producer of A SYRIAN LOVE STORY Elhum Shakerifar and May Abdalla from immersive storytelling collective Anagram. These keynote speeches are presented in partnership with Women in Film and TV and the BFI Film Academy and are designed to provoke and inspire attendees before the day ahead.

Ticket holders will have access to our ‘Backstage’ at the Future Film Festival space powered by Blackmagic Design.  Speakers, award nominees, industry guests and audiences can come together to discuss and share ideas, network with fellow filmmakers, learn more about filmmaking skills, practice and technology from Blackmagic experts, get online to talk about what they’ve watched, heard or created over the 4 days and enjoy a complimentary cup of coffee. In addition, BFI NETWORK, which discovers, develops and provides support and funding for exciting film talent across the UK, will be hosting a networking drinks for all filmmakers with a short in the Festival, as well as awarding £1,000 to a winning filmmaker to go towards the production of their next short film.