The Rebellion Through A Different Lens. Guest Post By Mark Newbold

By welshslider December 22, 2016
The story of the mission to steal the plans for the Death Star always felt like it was destined to be a part of the wider ‘back story’, at best told in a comic, a novel at best. 2012 and the sale of Lucasfilm to Disney changed all of that, opening the floodgates of opportunity and giving Lucasfilm/Disney a much broader canvas to paint their stories on. That canvas wasn’t framed exclusively by the saga of the Skywalker family. Much like the onscreen animated adventures in Star Wars Rebels, big screen adventures were not required to adhere to the ‘saga’ format. No John Williams bombast, no opening scroll, no wipes and pans, no focus on the Skywalker clan. The galaxy had gone widescreen and muck like K-2SO’s observation on Jedha, suddenly there were no horizons.

John Knoll’s original pitch, back in the mid 2000’s to Rick McCallum for the Underworld TV series and later to Kathleen Kennedy after the Disney acquisition is already the stuff of movie lore, but bringing a concept from paper to screen is far more difficult. Factor in the absence of the man who created the original canvas – George Lucas -  from the equation and understandably there was reason to doubt it could be successfully pulled off. Through skill, craft, good fortune and some deft observations the end result is a triumph. Rogue One: A Star Wars Story manages to pull off the seemingly impossible and evoke not only the stylistic, 70’s infused look of the original film but fold in cutting edge visual effects technology without it feeling obtrusive. It also brings back a character from beyond in such a remarkably clever way, if it doesn’t win some kind of special technical award next spring then there really is no justice.

The galaxy is pinned under the jackboot of the Empire and the rebellion is pushed to breaking point. Teetering on the precipice of submission we find an alliance ground down by defeat after defeat, a council divided by indecision. No one is willing to make that big push, take the ultimate gamble and go for broke. Without change the rebellion is doomed. Thank the stars for Jyn Erso. The daughter of brilliant scientists, Jyn understandably feels a deep sense of abandonment. A loner at heart she runs from flashpoint to flashpoint, not realising that her lineage holds the key to the fate of the galaxy. Thankfully, Jyn is more than up to the task of grabbing the brass ring. Liberated by the alliance after her true identity is revealed she teams up with an equally lost soul, Captain Cassian Andor. A rebel intelligence officer, Andor has seen things, done things that weigh heavily on his soul. He knows there needs to be a change, a better way, but he doesn’t know what that way is. It says everything of the alliance that they would ask so much of Andor again and again and again. This is an opposition undreamt of before December 15th.

Our team comes together. Reprogrammed Imperial droid with a sarcasm chip in full working order K-2SO. Guardians of the whills Chirrut Imwe and Baze Malbus. Former Imperial pilot turned defector Bodhi Rook, Cassian and Jyn Erso herself. We have a team, we have a mission, but there’s far more to this film than a simple, linear task. Rogue One: A Star Wars Story not only chronicles the theft of the Death Star plans but also a sea change in the attitude and focus of the alliance. To take victory they must make the hardest choices, risk the highest stakes. Rogue One sees the alliance do just that through the inspiring determination and sacrifice of this rag-tag group.

Much has been made of the leadership skills of Jyn Erso, but her role is far more involved than that. Changed by the realisation that her father sacrificed everything to save the galaxy from tyranny and make it a better place for his daughter – a daughter Galen doesn’t know is alive or dead – she inspires the alliance to go for broke and TAKE the plans, fully aware that the odds are she won’t be coming back. Cassian is with her every step of the way, as are the rest of the team. Led by orders from a determined general, by order of his master, obligation to a friend, a deep belief in the Force, it doesn’t matter. Every member of the core team and the soldiers who join them are driven to succeed, even when the shield gate above Scarif closes and escape is impossible.

The shadow of the Death Star looms large over Rogue One: A Star Wars Story and while no planet is
destroyed, the station is more of a threat here than in A New Hope. By Episode IV the station is fully operational and set to kill, as opposed to stun as it is here. Seeing the destruction of the holy city and the citadel on Scarif is genuinely eerie and affecting. A rolling tsunami of land, the disappearance of the horizon, a mushroom cloud of destruction, all viewed from high above as the wreckage of the planet below reaches up like tendrils to the station above.

It’s powerful stuff and only elevates the events of A New Hope. It just goes to show the strength, four decades on, of the original film and the clever writing on show here in 2016. Both films are now eternally linked. No longer will you watch A New Hope without thinking of the sacrifices of K-2SO, Bodhi, Chirrut, Baze, Cassian and Jyn. Without their selfless actions the greatest opening scene in cinema history wouldn’t be possible. The alliance wouldn’t have in their hands the detailed knowledge or the testicular fortitude to mount an insane snub fighter attack on the Death Star. Red and Gold Leader, Ponda Baba and Dr. Evazan, Chopper and The Ghost, Princess Leia, and Grand Moff Tarkin.

Rogue One: A Star Wars Story expertly shows us that nothing in the Star Wars galaxy is out of bounds. Future standalone episodes will follow, giving us further insight into beloved saga episode characters. All of that is made possible by the ground-breaking work done here by Lucasfilm, the writers and producers, director Gareth Edwards and his top-notch cast.
The horizon is gone. 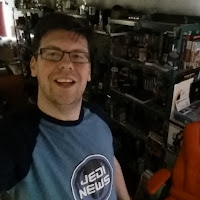 Mark Newbold
Mark was first caught in the Star Wars tractor beam back in late 1977, when Star Wars finally arrived in the UK. He launched Lightsabre in late June 1999 and after a decade as one of the UK's best known Star Wars sites merged with Jedi News in August 2010. He has written for Star Wars Insider since 2006 and has contributed to Build The Millennium Falcon magazine. He is an Honorary Friend of both the 501st and the Rebel Legion and is co-host of RADIO 1138 and Take Cover on the Jedi News Network.