Rogue One: A Star Wars Story - A Second Opinion 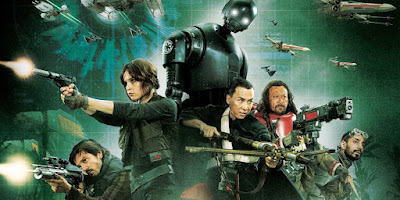 Following our in-depth review of Rogue One by Paul and Patrick Gibbs I thought I would chip in with my two cents on the new Star Wars movie.  Be warned, from this moment on there are going to be possible spoilers.  Turn back now if you've yet to watch the movie.

I'm not going to over analyse the movie, instead just give my brief thoughts as a long-term fan watching the first anthology movie set in the Star Wars universe.  Things feel different from the offset with no opening crawl and straight away you know this is going to be different to what you've come to expect from a Star Wars movie.  For the first twenty minutes Rogue One jumps around...a lot.  To such an extent you could easily get lost as they establish the new characters and their back story.

It quickly becomes apparent that director Gareth Edwards doesn't like a scene to outstay its welcome.  Last year when I reviewed Star Wars: The Force Awakens I remarked on how J.J. Abrams slowed the pace down considerably compared to George Lucas who enjoyed a faster and more intense feel to his movies.  This gave the viewer a chance to enjoy each set piece and keep ones breath before the inevitable space battles.  Gareth Edwards on the other hand has the opposite approach.  Some scenes last just a few seconds before jumping to another.  At one point there is a scene where we are enjoying our Rogue team battling on the beach.  Suddenly the scene cuts to Jyn jumping from a window to get her hands on the battle plans for the Death Star.  That scene lasts less than five seconds before we are transported back to the battle on the beach.  That's not a one off too. 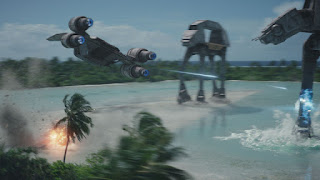 This is not a complaint as the pace fits the movie.  For the last act its all action.  Space battles, hand
to hand combat and more.  For these moments the pace fits well.  However for other parts in the movie such as the reveal of Darth Vader we get some weird cuts which made me think 'wait, I was watching that!'

As I say, perhaps the pace and the editing was needed for this style of movie and perhaps its closer to how George Lucas would have done it if he was still in the director's chair.

I did enjoy the movie, very much so in fact.  You will come away out of breath and trying to process what you've just witnessed.  Its fast, very fast.  I felt I just went on a two hour roller-coaster ride with my brain sometimes telling me 'slow down.  No!  Don't slow down.'

There are some wonderful tips of the hat to Star Wars: A New Hope with clever throw away lines and scenes that will make you smile.  Remember Cornelius Evazan and Ponda Bana in A New Hope?  You know, the one that says 'You just watch yourself. We're wanted men. I have the death sentence on twelve systems.'  Well they turn up in the movie with the same lines.  It will make you smile.  Obviously they made it off Jedha City before the Death Star obliterated it.

Also Rogue One will explain how Luke Skywalker ended up with the Red Five call sign.  An opening becomes available after watching the battle scene in the movie.

One part of the movie, well actually two but I'm not going to spoil the surprise that made me gasp was the way they managed to get an Episode IV looking General Tarkin in Rogue One.  You will slightly see the CGI but it's still impressive.  As mentioned there is another character they use this technique on and that, I guarantee will make you smile.

Everything else about the movie clicked into place rather nicely.  It's a clever story that only enhances the collection of Star Wars movies.  You will (as I am doing as I write this) go home from the cinema and want to watch Episode IV.  The opening scroll of A New Hope now has so much more depth to it and that is all thanks to Rogue One.

Gareth Edwards has done a fine job and as a Welshman myself I say not bad for a director who's mother and father come from Usk and Pontypool.  Those moments he spent in the car with his parents reciting Star Wars lines on day trips to Wales have certainly paid off.

Right, that's my two cents on the movie.  I'm off to catch my breath before boarding the Rogue one ride once more.