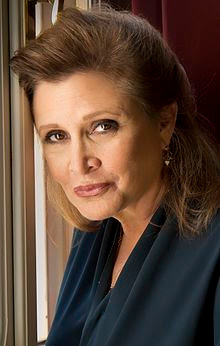 Reactions on Twitter are coming in to the sad news of Carrie Fisher passing away today at the age of 60.  Here are a few of those reactions:

I'm deeply saddened to learn of the death of Carrie Fisher. I will miss our banterings. A wonderful talent & light has been extinguished.
— William Shatner (@WilliamShatner) December 27, 2016

She was the brightest, funniest, bravest, kindest, cleverest and sweetest person I ever knew. A crushing blow to lose @carrieffisher
— Stephen Fry (@stephenfry) December 27, 2016

Carrie Fisher was smart, funny, talented, surprising, and always a hell of a fun time to be around. Family Guy will miss her immensely.
— Seth MacFarlane (@SethMacFarlane) December 27, 2016

Thank you Carrie Fisher for all that you've given us.  You'll be missed. pic.twitter.com/q74YkG9KPg
— The Academy (@TheAcademy) December 27, 2016


I thought I had got what I wanted under the tree. I didn't. In spite of so many thoughts and prayers from so many. I am very, very sad.
— Anthony Daniels (@ADaniels3PO) December 27, 2016


No words. We love you @carrieffisher forever our Princess. May God bless you as richly as you blessed us #CarrieFisher pic.twitter.com/1UNsWOEKuW
— James Arnold Taylor (@JATactor) December 27, 2016


Numb. Unbelievable that such a bright funny loving spark could be extinguished. @carrieffisher you will be missed. I wish you peace.
— graham norton (@grahnort) December 27, 2016


I'm deeply saddened at the news of Carrie's passing. She was a dear friend, whom I greatly respected and admired. The force is dark today!
— Billy Dee Williams (@realbdw) December 27, 2016