Movie Review: "Passengers" is a Bumpy Ride That Fails To Reach its Destination

This is a difficult movie to review without a lot of spoilers, but I'm going to do my best.

Set in the semi distant future when Earth is grossly overpopulated and only partially habitable, Passengers  begins with the Starship Avalon on a 120-year voyage transporting over 5000 colonists to Homestead II, on of several plants ripe for colonization owned by the Homestead Corporation. The long journey requires all of the passengers and crew of the luxury liner to remain in cryo-sleep, but a malfunction wakes up a passenger, mechanical engineer Jim Preston (Chris Pratt) 90-years early. Jim is understandably very concerned and upset, as his life becomes something like Cast Away meets The Martian.  His only companion (apart from very limited interactive computer systems that can't carry on a conversation) is Arthur (Michael Sheen) , a robotic bartender who operates what is not a Shining theme attraction, so get that out of your head right now. And because he's not a first class passenger, Jim can't get access to good food or coffee (though he can have his choice of alcohol, because hey, that stuff isn't expensive.). So Jim does what anyone would do in this situation and starts growing his best "Ben Gunn" beard and long hair to indicate the passage of time to the audience, and plays basketball, a space age version of "Dance Dance Revolution", and tries to find out more about the ship. When he is at his loneliest, one year into his isolation, Jim discovers the sleeping pod occupied by a beautiful female passenger, Aurora Lane (Jennifer Lawrence) and becomes instantly infatuated. He begins to study her records, watch her video journal entries explaining why she chose to make this journey  (again, his status level won't allow him to get anything other than black coffee, but he's allowed access to all of her information and recordings.). Jim is faced with the decision of whether to spend the rest of his life alone or whether to wake up the sexiest woman alive and live alone with her on a luxury space station. You'll never guess what he decides.

The biggest strength of the film is Pratt, who gives possibly his most low key, human performance to date, making Jim a smart, lonely every man that it's hard not to relate to at times, and he nicely plays the haunted sense of guilt over his unthinkable act. This movie did a lot of to convince me that Pratt can start branching out more, and he is the reason I'm going easier on this film than perhaps I should (along with Thomas Newman's score.).  The story works better than you would expect because he doesn't come across as a creep, merely a very sad guy in a desperate situation. But he's still a kidnapper, holding a woman under false pretenses and taking advantage of her, and to say that's tough to get past is an understatement. Lawrence is everything we expect her to be: strong willed, independent, sexy and intelligent. But it's still a much weaker character than we are used to seeing her play, and she is reduced to being ogled by the camera far too often (the sheer number of swimming scenes she is given that seem to be there only because of the mesh bathing suit she wears is staggering.). 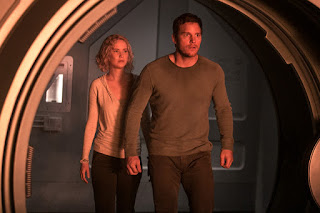 Still, the movie does have strengths. The stars have a definite chemistry, and much of their interaction is entertaining and charming (again, if you can get past the whole "kidnapping" thing.). It deals with theme of dreams and expectations versus reality, and the nature of finding one's place in the universe, in the most obvious ways possible, but does so effectively, and if you are the kind of person (like me) that enjoys anything set in space, there is definitely some enjoyment here.


But naturally, the course of true love/kidnapping never did run smooth, and there are some big complications, and the film suddenly develops a strong "Titanic in Space" element. This section
of the movie is saved from disaster by the presence of an extremely likable Laurence Fishburne. There are some exciting sequences, but plot holes abound, and just when it seems like screenwriter Jon Spaihts has found away to dig himself out of the hole he's gotten himself into and give us an ending that makes the whole movie work, somebody chickens out, whether it was Spaihts, director Morten Tyldum, or the studio, and it's a big let down, because this could have actually been a very unique movie about flawed but human characters, the consequences of our decisions and the brutality of loneliness.

Passengers is a movie that raises some interesting questions but falls short of being thoughtful, and in the end it's really a matter of how much you like these two stars. There was a much better, and much smarter movie in here, and the real shame is that sexist Hollywood thought they were playing it safe with the version they gave us. And if audiences feel that way, it's an even bigger shame.

The Bearded Trio - The Site For Steven Spielberg, George Lucas, John Williams and a whole