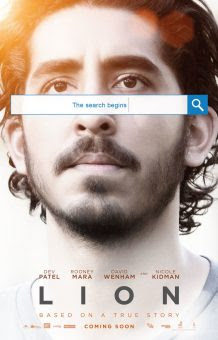 
It's almost a shame to write a review for this movie, because it's such an amazing story and so unforgettable that the ideal way to view it is to go in knowing as little as possible. But it's the kind of movie that we love to champion and encourage people not to miss.  So, if that is enough to talk you into giving the movie a chance, stop reading right now and just go see the film today. 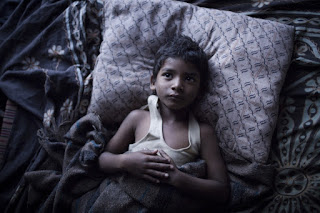 For the rest of you: Lion tells the true story of a Saroo, a five-year old Indian boy in 1986, who livesin poverty, but relative happiness, with a  loving family. His mother works in construction, barely making enough for the family to survive, so Saroo and his older brother Guddu take to begging for food and money at the railway station, and Guddu is even able to find sporadic work sweeping the floors of train carriages. One evening, when Guddu goes to ride the train to the city in search of work, Saroo comes along. Saroo is so tired that he collapses onto a seat on the platform. Feeling guilty for taking the younger boy out so late at night, Guddu tells his little brother to wait and promises to be back shortly.

But when Guddu does not return, Saroo becomes impatient and boards an empty carriage, hoping to find his brother. When he can't find Guddu, Saroo falls asleep. He awakes the next morning to find the train travelling across unfamiliar country, and he is trapped inside for hours. When the train finally stops, the young boy is in a strange place thousands of miles from his hometown, and unable to communicate as almost no one around him speaks Hindi.

From here, Saroo is forced to survive the best he can on the streets, narrowly avoiding some truly horrifying experiences. 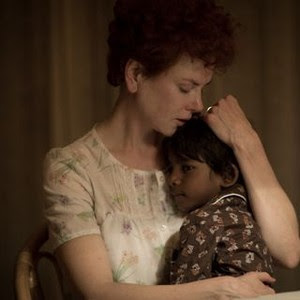 Eventually, he is adopted and sent to live with a couple in Hobart, Australia (Nicole Kidman and
David Wenham) who eventually adopt a second Indian boy. Saroo is loved in his new home, and when the story picks up 20 years later, Saroo (now played by Dev Patel) is happy young man. He is a student, looking at a career in hotel management, and he has a beautiful girlfriend named Lucy (Rooney Mara.). He has a life that any would envy, and no reason to change it. But when a memory of his brother is triggered at a party, he realizes that the story of his life in India isn't over yet.

Lion will be dismissed by some as a Hollywood feel good movie, and that is entirely their loss. It is an emotional tour de force that not only tugs at the heart strings but forces the viewer to look back on their own life, and to look inward and think about the experiences and people that have made them who they are. Saroo's journey, both physical and emotional, are more gripping than any fictional epic adventure story, and the prize that may or not await him at the end is far greater than any ancient artifact or treasure. This is a story about what it means to be human, to love and to be loved, brotherhood, and duty to family. It is a story of good and evil, of heartbreak and joy, and of profound truth and insight. 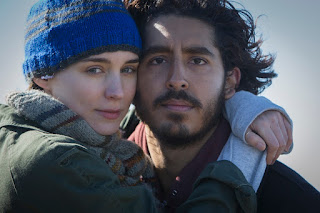 Director Garth Davis, in his feature debut, establishes himself as a filmmaker to watch for, deftly handling the performances (including the young children, Sunny Pawar and Abhisek Bharate, who deserve much more attention than they are getting for this film.).  His visual style is nothing groundbreaking but it's skilled and smooth, with a great sense of pacing. He runs the very real danger of losing our interest with the romantic subplot between Patel and Mara (both of whom are quite good, but given the rest of the story it deserves minimal attention), but he manages to provide some charming moments even in the film's most conventional plot thread., and he keeps it short. While Lucy is based on a real person, the desire to insert a romance teeters on being a Hollywood touch, but it's not fair to dismiss it. In order for the full power of the story to be maintained, the audience needs to see that Saroo has every reason to be content where he is in life and not look back, and Mara, talented and engaging actress that she is, provides that very effectively.

Nicole Kidman gives a superb supporting turn as Saroo's adopted mother, hardly a glamorous character but arguably the best role she's been given in years, and the scenes between Kidman and Patel are beautiful and surprisingly subtle. Patel manages to truly step out of the shadow of Slumdog Millionaire for the first time in his career, and the biggest triumph of the film is how much we grow to love these characters. In particular, Saroo's relationships with long lost older brother Guddu, and his troubled adopted brother Mantosh (Divian Ladwa) are riveting and deeply touching. This movie made us cry just talking about it afterwards, to say nothing of the actual viewing, but it never falsely manipulates your emotions. It's both the sincerity at the heart of the story and the strange mix between a life story we can't even imagine going through and the moments that are universal to childhood and growing up that make this one so completely satisfying.

Lion may not be toward the top of your list for the holiday movie season, but it should be. It will stick in your head, and your heart, forever.