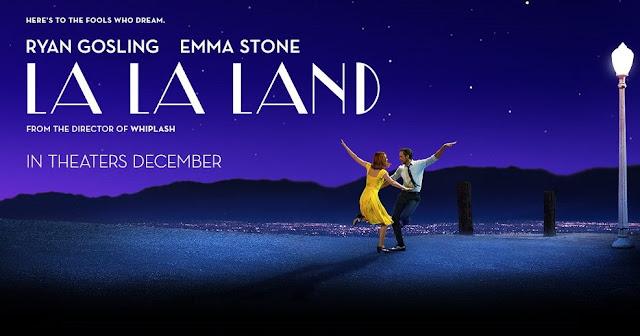 
By now, you've probably heard a lot of talk about how good Damien Chazelle's La La Land is, and you're either dying to see it or feeling skeptical. We're here to tell you that it's as good as you've heard. La La Land is the most genuine and heartfelt movie musical since Moulin Rouge! But it is definitely a movie musical, and it's likely to play better to cinemaphiles than to hardcore Broadway fans. 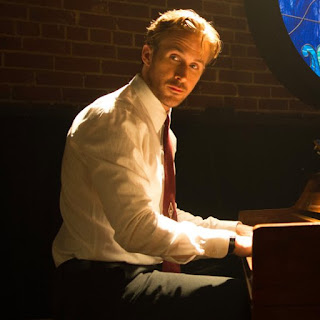 The film begins with a rousing and wildly inventive song and dance number set  on a crowded Los Angeles highway, after which we meet our leads: Mia (Emma Stone), an on-studio barista and aspiring actress, is distracted by her preparation for an upcoming audition, which leads to a slight moment of road rage between her and Sebastian (Ryan Gosling), a jazz pianist.  The two seem destined to keep meeting in random places, as on the same day she fails the audition, Mia sees Sebastian play a terrific performance at a restaurant, where he gets fired by the owner for deviating from the playlist.  play, moved by his talent.  Mia attempts to compliment his playing, but in his frustration, he coldly passes her. Months later, Mia is at another party and notices Sebastian again, now playing as the keyboardist for a 1980’s pop cover band. From there the two start to form a tentative relationship. 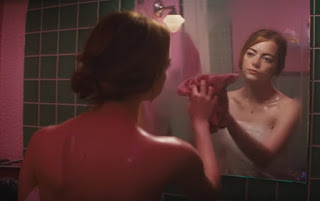 The story is a fairly typical but sincere relationship drama, made special by Gosling and Stone, who makes us fall in love with them as they fall in love with each other. But it's also a story about pursuing your dreams, whatever it takes, and the sacrifices made along the way. It's definitely a theme that hits home to anyone who has tried to make a living in the entertainment industry, and aspiring artists are going to be the ones the movie speaks loudest to, but you don't have to be an actor or musician to enjoy it.

There are some pretty bold choices made here, not the least of which is to save the absolute powerhouse singing until the final act. Gosling is not much of a singer, but he's not pretending to be, and the rough but sincere tones suit his character. Stone, on the other hand, is a terrific singer, but is literally holding back until the appropriate moment for her character to show what she's got, and it's a spectacular moment. It's not that she's bad before then, she's just not truly amazing until it's right for the story. Still, there may be those that complain that they wanted to hear her singing like that throughout, but Chazelle absolutely makes the right decision and it makes the movie all the more memorable. The other bold choice is the mixture of old fashioned classic Hollywood musical staging (the film begins with an announcement that it is shot in Cinemascope, and they aren't kidding. No musical in decades has shot wide angle dance sequences like this, and it's glorious) and the abundance of more modern steadicam shots, allowing us to follow the action and the characters as the move at speed of the hustle and bustle of Los Angelinos.

It's hard to think of another film that has been so big and so small at the same time, and the stylistic choices allow us to feel the limitlessness of dreams and the intrusion of mundane and frustrating reality; it also allows us  to experience the grand and sweeping moments of romance along with the smaller, intimate moments, as well as the high and lows of a relationship between two people who may or may not have time for each other.

The songs, by Justin Hurwitz, may not be able to compete with those in Moana in terms of polished energy and belt it to the back row power, but they aren't supposed to. This is a jazz musical, and the simplicity and old fashioned sweetness in a complex modern setting is a very important part of the film's endless supply of charm. The lyrics are cute and clever (and occasionally profound) and the melody is always appealing.

For sheer heartfelt artistry, as well as unabashed sincerity, La La Land is as good as it gets, and we're calling it the frontrunner for the Academy Award for Best Picture (it's not the most important movie, but with the possible exception of Arrival, it may be the only one that pretty much everyone likes.).
It is certainly one of 2016's finest achievements in entertainment. 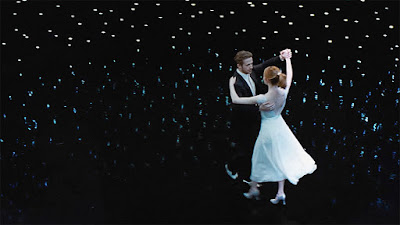 The Bearded Trio - The Site For Steven Spielberg, George Lucas, John Williams and a whole