Adapting a stage play for the big screen is a greater challenge than it may seem. Film is inherently a more visual medium than the stage, and at times what takes several minutes of dialogue to say in a play may be better expressed on film through a single image. However, one of the greatest strengths of a great work from either medium is the performances of top quality actors, and Denzel Washington's interpretation of August Wilson's 1985 Pulitzer Prize winner Fences has that part down. Washington has chosen to do very little to "open up" the play for the screen, instead showcasing Wilson's text and a superb cast (himself included) to deliver powerful drama that sometimes feels more like a filmed stage production than a cinematic experience, but is compelling and powerful sometimes because of this approach rather than in spite of it. 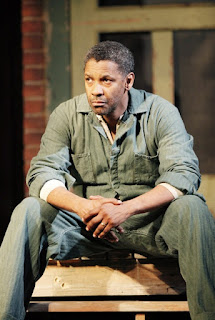 Washington stars as Troy Maxson, a gabarge collector in 1950s Pittsburgh, who is embittered by his inability to parlay his early glory in Negro league baseball to a lucrative major league career, due to his being too old by the time the major leagues began accepting black players.  Troy has a larger than life personality and spins tales of encounters with Death and the devil, and occasionally offers glimpses into his troubled childhood and early life. Troy lives with his loving and loyal wife Rose (Viola Davis) and their son Cory (Jovan Adepo), whose success as a high school football player inspires resentment rather than pride from Troy.  Troy and Rose have a loving marriage, but his stubbornness and anger do seem to wear on her.

The early part of the film in particular unfolds as a stage production with little cinematic flourish, though Washington and cinematographer Charlotte Bruss Christensen know how to use the camera, adding a degree of visual interest with beautiful lighting , and they make the bold choice of reserving close ups for when it most dramatically effective, which adds power to those moments but increases the feeling that we're watching a play. But it's a very good play, populated by vivid characters brought to life by an excellent cast. Washington's Troy is a complex figure, at once magnetic in personality and infuriating in his biterness and lack of overt affection for his son, and a second act surprise makes him an even less sympathetic figure. Yet Washington's performance and Wilson's writing never let the character drift from a sense of realism and genuine humanity, and that makes him compelling even when we can't stand him. 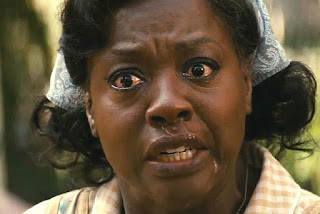 Washington is somewhat theatrical, getting the most out of Troy's speeches and storytelling (more Much Ado About Nothing), yet he pulls back enough to dodge the risk of becoming over the top. And Davis has a presence that at least matches that of her co-star, though it's a somewhat more quiet role. Still, Rose's strength and love for her family provides the film with much of its power, and our hearts break along with hers when Troy's choices cause us pain. No one can beat Ms. Davis when it comes to conveying raw, honest emotion, and it's an exquisite performance that deserves to bring her an overdue Oscar. Meanwhile, Jovan Adepo as Cory brings some of the film's most powerful moments, and he is definitely a young actor to watch for in the future.
than once we were reminded of his delightful turn in Kenneth Branagh's

The movie becomes more cinematic in its final act as time begins to pass (but remains so much a play in spirit that the act breaks are obvious even if you've never seen it on stage), and the rather abrupt change in style is a bit jarring. By the last scene, it's very much a play again, but there's no getting around the fact that this material is meant for the stage. Even the metaphor of the fence Troy is building around the house is decidedly a bit of theatre symobolism, brought out overtly in dialogue. Whether the film is too stagey is something that is being widely discussed, but few seem to be accusing Washington of losing the tone and spirit of the play, and the fact that he does have such a strong handle on the play itself makes it work. It's no Frost/Nixon, but it's a more successful transition to film than Doubt, which tried to over compensate for it's talky script with sudden fits of over the top camera work.

While it may fall short of being a great film, August Wilson's Fences is a great work of art, and Denzel Washington gives what should be looked at as a stellar production of that play if nothing else.
Because at its heart, whether it really belongs on the screen or just he stage,  Fences is a powerful work that is compelling, disturbing and very moving, and it's more than deserving of your time.