"Hook" Bangarangs: Celebrating 25 Years of a Spielberg "Disappointment" That Has Become a Pop-Culture Classic

"That's the interesting thing," Steven Spielberg said in a recent interview to promote The BFG, "I don't love 'Hook', but my kids do. There's a whole generation out there that appreciates the movie for more than I put into it."

Spielberg's 1991 fantasy was one of the most highly anticipated films of his career, and in retrospect, expectations for another E.T. were high enough that the film couldn't possibly live up to them, especially with the added excitement of starring acting legend Dustin Hoffman, comic superstar Robin Williams, and current "it" girl Julia Roberts.  When the film hit, critical reviews were, in most cases, mixed from mediocre to downright hostile. It was a box office success, but not the all-time hit it was expected to be. There was even talk that the "Spielberg Era" was over (two years later the one-two punch of Jurassic Park and Schindler's List would make such talk laughable.). While the film's critical reputation may not have improved much (Rotten Tomatoes gives it a mere 30%, 2% lower than 1941), over the past 25 years it has endured as a beloved perennial favorite in the way few other films of its time have. The millennial generation Spielberg mentions seems to remember it with far more love than such contemporaries as Home Alone or Honey, I Shrunk the Kids. After Robin Williams' tragic death in 2014, U.S. President Barack Obama even specifically referenced it in his remarks. And while I'm older than the millenials who grew up on it (I was 16 at he time it was released), my attachment to the film is personal enough that when I had a kidney transplant my brother brought my Hook poster to the hospital to comfort me, and when I held my newborn son in the hospital early this year I couldn't stop think of Peter's monologue about choosing to grow up so he could become a father.  For a film even its own director seems to give little respect, Hook has endured. For many of us it continues to resonate and hold a special place in our hearts, and on Sunday, December 11, we celebrate the 25th anniversary of its release. 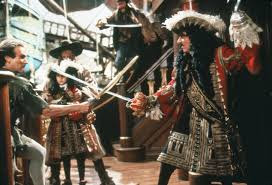 While it certainly helps that the original source material is one of the most universally beloved childhood classics of all time, multiple subsequent versions of or variations on Peter Pan have failed to catch on. And while coming from Spielberg may cause a legion of fans go easy on it, when was the last time you heard somebody gush about how much Always means to them? In contrast, directing a short film a few years back, I wore my Hook T-shirt on set one day and had more than half of the cast and crew tell me it was one of their all time favorites. No, Hook is special. But why? What has made this alleged dud earn so much love? Here are a few answers.

The first TV spots used a simple tagine that summed up the ingenious conceit of the concept: "What if Peter Pan grew up?"
While other films have tried to replicate Hook's formula of seeing fairy tale characters long after their classic tale is done, it doesn't work the same way.  Tim Burton's 2010 version of Alice in Wonderland is almost a plot point by plot point transposition of Hook, but the concept of Lewis Carroll's heroine growing up doesn't have the same irony or resonance.  Where Alice was an overly serious and almost adult like little girl, Peter was the boy who refused to grow up. The ultimate symbol of the joy of childhood. And to have him grow up to forget who he is and become a joyless suit who doesn't know how to have fun is a great metaphor for how the drudgery of adult life can kill the innocent child inside us, and his eventual return to form ("good form", as his nemesis would say) captures the joy we feel at the moments when that child is resurrected. This makes the film even more appealing when viewed through the lens of nostalgia, and alows those who grew up on it to appreciate it on a new level as adults.
The Performances 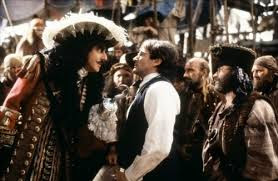 Hoffman got a little bit of love when the film was released, earning a Golden Globe nomination as Best Actor in a Musical or Comedy (though I would argue the film doesnt quite fit either of those categories). But for the most part the cast was ignored or dismissed as just giving empty star turns, and I consider this unfair. Williams in particular was misunderstood, criticized by some for not being as wild and funny as he was capable of being. But that simply wasn't the character of Peter Banning, and never has been Peter Pan. Williams handles the character arc and evolution beautifully. He's completely convincing as an uptight, wimpy professional, and when he does become Pan the childlike wonder he always possessed shines as brightly as the second star to the right, and that's the soul of the character, not the sort of manic comic riffs he would pull off brilliantly the next year in Aladdin. Again, it speaks volumes to me that this was one of he performances I most frequently heard mentioned by fans upon William's passing.

Hoffman and Bob Hoskins display a delightful comic chemistry, even if some of their scenes aren't paced perfectly. And while Julia Roberts' work in the film has been much maligned, I found her magnetic and likable. It may have helped that this was the first film I ever saw her in, but I still feel she projects the perfect balance of tomboyish spunk and sweet vulnerability.  Finally, young Charlie Korsmo gives a sensitive performance that ranks as the best of his too brief career. 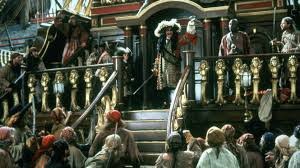 Spielberg has been critical of his vision of Neverland, commenting that his imagination failed him and he was too quick to simply "throw paint on a tree" or things of that nature. I'll admit that some bizarre and not entirely successful choices were made, such as the pools of soupy Play Doh, or the food at he Never-Feast which appears to be, well, Play Doh. And at the time I hated Rufio's "skunk head with too much mousse" hair do, though it's grown on me over time (this is probably just the rose coloring of nostalgia). But come on, that pirate ship and the pirate village in general are spectacular. The overhead shots of Neverland are gorgeous, and everything about Granny Wendy's house is perfect.

Whatever flaws the rest of the film may have have, John Williams' score is a knockout from beggining to end. From the stirring, adventurous themes that accompany flying through the air or fighting pirates to the gentle and sensitive quieter moments to the soaring theme that accompanies the denoument, theme after theme is just plain beautiful, and this ranks among the most frequently listened to soundtracks in my extensive collection. I nearly wore out the cassette I was given for Christmas 1991, I listened to the CD many times over the years, and I used the MP3 version to introduce my son to the magic of John Williams. Criticize this score and I'll cut off your hand and feed it to a crocodile .

The Direction and Cinematography 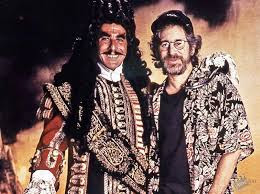 This is a case where I must respectfully disagree with my cinematic hero and say he did better work than he thinks he did. He guides the camera as expertly as ever, with the slick, smooth movement and transitions of the London sequences being something that sits in he back of my head every time I'm shooting a film project (it's worth pointing out that Spielberg goes much easier on this section of the film, even stating he's proud of his work.). And while he may not be happy with the way he visualized Neverland, he succeeded in transporting us to another world, and for us fans, the Spielbergian sense of joy and wonder is certainly there. For my money cinematographer Dean Cindy has never gotten enough credit for the stellar work he's done throughout his career, and in Hook he adds a wonderful sense of atmosphere with the shadows and soft lighting of the London sequences, and his trademark gorgeous color saturation to Neverland.

Finally, it's the joy of childhood that gives the film the timeless emotional pull that makes it so close to fans hearts, and nobody puts that on film better than Spielberg. Hook was a treasured part of childhood for those who grew up on it, and for those of us a bit older it took us back there, and still does. And it perfectly captures how having children of our own to care for gives us the best of both worlds.

Hook isn't a perfect film. But it's a beloved one that has great personal meaning to many of us. Long after some of 1991's critically acclaimed triumphs have been largely forgotten (does anyone still really have strong feelings about Bugsy or The Prince of Tides?), Hook endures. Like its hero it retains its young and joyful charm forever, while adding layers of depth and maturity with age. It's not a masterpiece, but to legions of adoring fans (of which I am most certainly one) it will always be a classic that lives on. And as Peter says "to live will be an awfully big adventure." 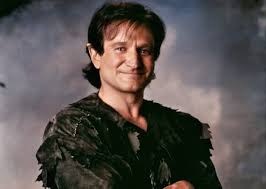