Her Magister Set to Give BFG Knightood 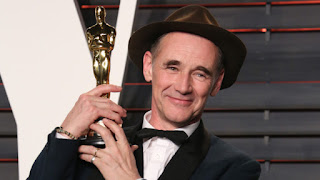 Steven Spielberg's new favorite actor closes out 2016 with an even bigger honor than the Oscar he won earlier this years for Bridge of Spies. Variety reports that Mark Rylance has made Queen Elizabeth's New Year's Honors List, and is to be knighted for his significant contributions to the British theatre.

It seems fitting for the actor who played Spielberg's BFG to recieve this honor from the very Queen he teams with in the film to save the children of England from the threat of the nasty giants, and we congratulate him on the honor. We only hope that when the ceremony comes he leave the Frobscottle at home this time.