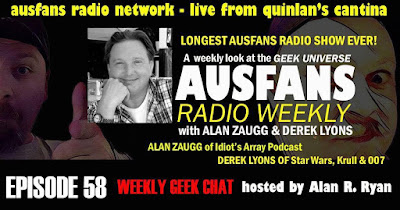 AusFans Radio Network have a new podcast episode out and it's their biggest yet.  Alan R. Ryan chats to Derek Lyons and Alan Zaugg from Idiot's Array podcast.  The show is packed with so much geekiness and The Bearded Trio recommend you put Ausfans Radio on your subscribe list.  Not to be missed.  Here's the show notes along with the links to listen to the show:

New show! New Ausfans! Hey everyone this is the biggest show I've done here on the network, and I hope you're ready. Starring on tonight's podcast is Alan Zaugg, my dear friend and yours from Idiot's Array, you're premier Star Wars podcast. Also later in the show, we chat to the one, the only Derek Lyons, as he takes us on a trip down memory lane to many of the amazing things, and projects he has done in his illustrious career.You might remember Alan from his appearance on the old version of this show, and where he joined us to chat about his love of Star Wars, but today we bump it up to twelve and get deep on his love of Rogue One, and go for the laughs with many terrible impressions, but they made this guy laugh ha ha, and also talk about the direction of writing, and his current load of reading material. We also introduce him to the writing of Peter F. Hamilton and Iain M. Banks.We then go from Utah to London as we chat to the amazingly talented, and gifted, Derek Lyons. His life story will amaze you, as Derek has truly been a part of some of the most amazing films, and you and I have grown up with those: Star Wars, Flash Gordon, Superman series, Indiana Jones and The Last Crusade, Krull and much more. We don't just talk about that, we get into what it was like to work within the studio system, George Lucas, Carrie Fisher and an amazing story he has from working with her. We also chat about his love of martial arts, music and a truly amazing array of entertaining delights which only this great man could give us. It was a true honour to chat to Derek, and I hope you love it as much as I did. Be sure to check out the documentary he was a part of on Star Wars: Elstree 1976.Ausfans Radio NetworkFacebook: facebook.com/ausfansradionetworkTwitter: twitter.com/arryan_writerInstagram: instagram.com/ausfans_radio_networkIdiot's ArrayIdiot's Array: http://www.idiotsarray.libsyn.comDerek LyonsDerek Lyons: dereklyonssite.comElstree 1976Elstree 1976: https://www.kickstarter.com/projects/832232974/elstree-1976Episode 58: http://ausfansradionetwork.podbean.com/e/ausfans-radio-episode-58-ausfans-radio-weekly/