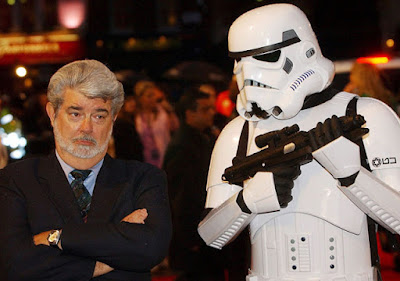 It seems that George Lucas had been working on Star Wars after the Prequels and actually had written down three or four ideas for standalone movies according to Lucasfilm president, Kathleen Kennedy.

During an interview with Entertainment Weekly Kennedy said "George talked to me about doing [standalone films] when I first came aboard [in 2012]. He had often thought about doing it and he had actually written down three or four thoughts and ideas, directions you could go."  Ultimately Disney didn't like the ideas and went in a different direction.

“We talked a lot about the Jedi and the foundational ideas that George had thought about when he created the mythology. It was sort of spit-balling ideas.”

"Obviously inside the mythology there were lots of opportunities. So that was the first conversation I had." said Kennedy.  She also talked about the future of Star Wars with a slight hint that they could just do standalone movies and leave trilogies alone.

"That's a conversation going on right now, too. I have to honestly tell you, could we [do nothing but stand-alones]? Sure. But I don't know. We are looking at all of that."