Frank Marshall Gives Some Secrets To Working On Hook, Back to the Future and Raiders of the Lost Ark 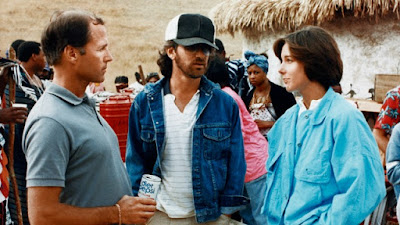 One of the biggest movie producers of all time, Frank Marshall was recently interviewed by News.com.au and gave some insight to working on some of the most popular movies.  Below are some of his memories working on Steven Spielberg movies.

HOOK:
They built some huge props for the 1991 movie starring Robin Williams as Peter Pan, but one of them in particular was a little too big.
“We built the [pirate] ship on the stage and when we went to film the ship Steven [Spielberg] wanted the entire ship to be in the frame,” Marshall said.
“But there had been a small error made in looking at the perspective so we had to open the door of the stage and put the camera outside to get all of the ship inside the frame.”

BACK TO THE FUTURE:
“That’s one of my favourite movies,” Marshall said about the 1985 classic.
“If you were in a script writing class I would just give you that script and say this is a perfect script.”
Marshall is particularly proud of how quickly they made the movie after they decided to replace Eric Stoltz with Michael J. Fox in the lead role.
“We recast Marty McFly and that cut six weeks off our post-production schedule,” he said.
“We finished the film in nine weeks which was like a world record in those days but we really wanted to keep to our release date so everyone put in a Herculean effort to deliver the movie. The traditional time in those days was 20 to 24 weeks and we did it in nine.”

RAIDERS OF THE LOST ARK:
“A little known fact is that one of the things I try to do at all the wrap parties as a present to the crew was to do a magic show,” Marshall revealed.
“The one in Tunisia [at the end of filming Raiders of the Lost Ark] was the best show I’ve ever done.”
Marshall performed under the stage name Dr Fantasy but sadly he’s since retired the character.
“Nowadays I’m DJ Master Frank,” he said.