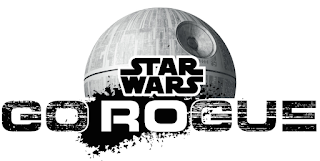 Time is running out for the heroes of the “Go Rogue” YouTube series, with just two installments left to outwit the Empire in this fan-created, toy-sized adventure. Written, directed and produced by a team of Star Wars superfans, the original four-part stop motion story stars key toys from the new “Rogue One” line before they hit stores Sept. 30. Chapter 3 is now available to watch below.

The series follows the imagined adventures (no film spoilers!) of “Rogue One” toys as they try to track down the building instructions to the LEGO Star Wars Death Star set that have been misplaced by the Empire. Chapter 3 features the first look at the Hasbro RAPID FIRE™ IMPERIAL AT-ACT™ in action, which can be controlled remotely by smart device, as well as now familiar characters in new toy forms and scale sizes, such as Hasbro’s 3.75” action figures. Additionally, some special effects in Chapter 3 were created using the Hasbro Star Wars StudioFX™ App that launches for free on Sept. 30*.

Death Star building instructions. In Chapter 3, the Rebels seek the second instruction book on rain-soaked Eadu, but the Empire has beaten them to the prize. Will they be able to outsmart the scheming Director Krennic to escape with the instructions and their lives

The four-part “Go Rogue” series has been embraced by fans worldwide, with the first two installments garnering more than 5 million views to date. The series kicks off a global UGC contest beginning Sept. 30that asks fans to share their own “Rogue Stories.” More information is available at StarWars.com/GoRogue for ages 13+,and for parents of kids ages 8-12, have them visit Disney.com/MyRogueStory.