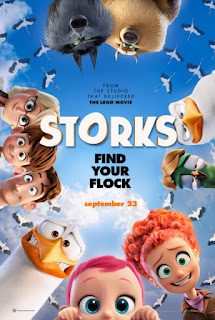 We're suckers for animated fioms, especially animated animals, and tend to go easier on the lesser (i.e. non Disney/Pixar) animated films than most critics do. And Nicholas Stoller, writer and co-director of Storks, is responsible for what we consider two of the funniest screenplays in recent memory, 2011's The Muppets (which he co-wrote with Jason Segal) and its sequel,  Muppets Most Wanted. And yet for us, Storks was only okay.

The premise goes back to an old legend kids today only know if they've seen Dumbo (heck, that's the only reason we know it): storks delivering babies.  In the film's reality,  the storks actually ceased making these deliveries 18 years ago, and instead now make deliveries for Cornerstore.com, essentially a variation of Amazon. The company is run by a blustery bureaucrat named Hunter (voiced by Kelsey Grammer), who is about to be receive a promotion, and tells the lovable goofy Junior (Andy Samberg) that he can have Hunter's job if he'll fire Tulip (Katie Crown), an 18 year old human girl who was the last baby the storks tried to deliver and has lived with them since the delivery failed. 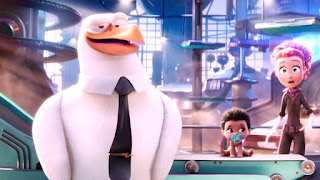 The story goes pretty much where you would expect it to, with nothing especially new or unexpected.  Of course that won't bother the children who are the movie's primary audience, and the quality animation and endearing character design go a long way. But, disappointingly, the film just isn't nearly as funny as you'd expect given the talent behind it. It's sufficiently amusing to kids, but there's not much there to make adults laugh.  This is puzzling when compared to Stoller's Muppets scripts, which were both funny and clever. Here he settles for tired tropes and simple gags that just don't hit the mark as well as they should, and the result is a film that certainly doesn't qualify as bad, but one which just doesn't inspire a great deal of enthusiasm.

Samberg's Junior is a likable protagonist, while Crown's Tulip is alternately lovable and genuinely annoying at times. Grammer is his usual blustery,  pompous self and Key and Peele are fairly amusing as the leaders of a wolf pack (though not as amusing as they're trying to be).  The character of Hunter's Pigeon Toady, as voiced by Steven Taylor Glickman,  is supposed to be humorously irritating, but only the second part of that works, and it works far too well. The uninspired but perfectly watchable film becomes a bit of an ordeal to sit through whenever he's on screen, and remember that this is coming from two guys so fond of animated creatures they're afraid to call Jar Jar Binks annoying because it might hurt his feelings.

All in all, Storks is a perfectly good diversion for kids, and the adults who go with them might be mildly amused. But in a year where we've had an abundance of quality animated films, this is a lesser effort, and considering the fact that we know its creative leader can do better, that's a shame.