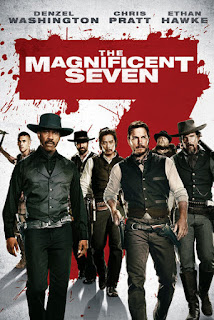 The audience that vocally denounces every new remake as an atrocity has been curiously silent about Antoine Fuqua's redux of John Sturges' seminal western The Magnificent Seven, which was of course itself a remake of Akira Kurosawa's masterpiece The Seven Samurai. Or perhaps it's not so curious as neither of those films comes from the 1980's or '90s and the uproar isn't so much over remaking beloved classics as it is over remaking our beloved classics. In any case, the mere fact that Fuqua has managed to make a star-studded western that's a major blockbuster release in 2016 is no small feat in and of itself. The fact that the result is an entertaining film that falls short of being truly magnificent likely won't prevent it from being the genre's biggest success since the 2010 remake of True Grit (though it won't contend for any major Oscars.). 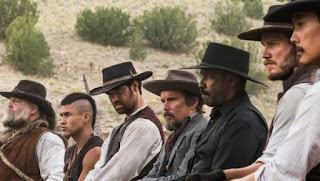 The new film begins in the American West in the post Civil War 1870s, in a small town called Rose Creek, where the good townsfolk are being terrorized by a greedy industrialist named Bartholomew Bogue (Peter Sarsgaard). Bogue is evil enough that it's an understatement just to point out that he deserves a mustache-twirling moniker like "Bartholomew Bogue": this is a villain so brutal and nasty that we are forced to invent the word "bastardacious" to describe his behavior. Not only is he using violence to force the townsfolk away from their homes for his own gain, he couches it in rhetoric about the virtues of capitalism that casts anyone who opposes him as an enemy to God, then burns down a church and shoots unarmed townsfolk to drive his point home (the 21st century political subtext to this is obvious enough without us having to add any commentary.). Emma Cullen (Haley Bennet, who previously appeared in Fuqua's The Equalizer), the determined young widow of one of the men Bogue killed, sets off to find some gun fighters who can help defend Rose Creek and teach the townsfolk (a great western word we are determined to use at least three more times in this review) how to fight and, just maybe, how to believe again. But mostly how to shoot enormous holes in people. 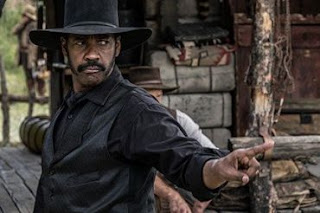 Emma finds her great black hope in the form of Sam Chisholm (Denzel Washington), a duly deputized so and so who demonstrates his very particular set of skills by easily dispatching a group of outlaws in the timed honored "I'm going to stand here and taunt you until you and everyone else in the room goes for their guns so I have an excuse to kill as many people as possible, because I'm the good guy" fashion. Chisholm agrees to help as soon as he hears Bogue's name, though we are not immediately certain whether this is due to a personal connection or merely the knowledge that anyone evil enough to be both named Bartholomew Bogue and played by Peter Sarsgaard has to die. In any case, Chisholm sets about recruiting his own rougher, less numerically impressive version of Ocean's Eleven:

- Joshua Faraday (Chris Pratt), a roguishly charming gunslinger brimming over with bravado, killer instinct and star power for a generation young enough to not really care about Denzel Washington.

- "Goodnight" Robicheaux (Ethan Hawke), a legendary killer who distinguished himself at the battle of Antietam and shares a past with Chisholm.

- Billy Rocks (Byung-hun Lee), an Asian assassin with the deadly knife-fighting skills federal law mandates must be demonstrated by at least one member of any group of western bad asses.

- Jack Horne (Vincent D'Onofrio), a tracker/mountain man who once killed an entire family of bears with his teeth and then stomped on their heads (we made that up, but it fits the character).

- Vasquez (Manuel Garcia-Rulfo), a Mexican outlaw who gives Faraday a chance to show us how much fun racism can be.

and finally,  Red Harvest (Martin Sensmeir), a Comanche warrior who makes vicious killings poetic and oddly spiritual in that special way only Hollywood Native Americans can. 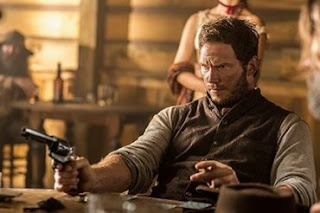 Fuqua has assembled an impressive cast, and all of them give engaging performances. While Washington is really just giving us a variation of the tough guy he's played in umpteen other films for Fuqua or the late Tony Scott, that's appropriate for a John Wayne/Clint Eastwood style cowboy hero, though in this case the intensity that usually lights up the screen like a blazing wildfire is closer to a Popeye nightlight. Pratt shows again that he has the charisma of a genuine movie star, and also that he is best cast as a character who acts like you would expect a man named "Pratt" to act. Hawke nearly steals the film with its most nuanced (if underwritten) performance, and D'Onofrio gives him a run for his money. Garcia-Rulfo is quite engaging, but he and Sensmeir are mostly there to provide diversity and bring the number up to seven, while Bennett ably demonstrates 1. that she is an acceptable Jennifer Lawrence type if the role is too small for an Oscar-Sinning superstar and 2. cleavage sells. Sarsgaard, a skilled if sometimes smarmy and hammy actor, resists the temptation to go too far over the top as he's being bastardacious toward the townsfolk, proving that he can be a better villain than he was in Green Lantern.

Fuqua's directorial skill continues to grow, and his love of the genre and the reference material is more than evident. When you think about it, many of Fuqua's previous films have been westerns tonally, if not literally, and his King Arthur may have been a lousy telling of the Arthur legend, but it was a pretty good version of The Magnificent Seven (portraying the Knights of the Round Table as a ragtag group of swordslingers protecting the townsfolk at Hadrian's wall), and it's abundantly clear that this is a dream project that has been brewing for a long time. We can clearly see the influence not only of the original, but of countless Clint Eastwood films and especially Lawrence Kasdan's Silverado (there is even an obvious reference to that film thrown in early on.). True Detective's Nic Pizzolotto (a name which sounds nothing like a cheap bathroom joke, and we are ashamed of you for thinking that) and regular Fuqua collaborator Richard Wenk (not even going there), the screenwriters,  provide plenty of snappy dialogue (most of which goes to either Pratt or Hawke), but they leave the characters as thinly drawn western archetypes and gloss over most of their motivations. Pratt's character in particular is directionless and lacking in definition, despite the actor's considerable charm (and his racist jabs at Garcia-Rulfo's character, intended to be comic, come across as particularly distasteful imnthe current cultural climate). This superficial approach leaves the film feeling somewhat empty at the end.

The fight sequences are staged and photographed with considerable finesse, and are extremely entertaining. But they're also absurdly violent: the fact that this film managed to get a PG-13 rating from the Motion Picture Association of America is about as good an example as we've ever seen of what a bad joke their ratings system is. Yes, the mayhem is light on blood, but the sheer number and intensity of the near constant shootings, stabbings, tomahawkings, throat slittings, tramplings, head-stompings, blowing uppings and other acts of extreme violence leave the audience feeling nearly as brutalized as the villains, heroes and townsfolk, and yet somehow the MPAA thinks this is more suitable for children than, say, The King's Speech.  Some of this can be attributed to the influence Tarantino has had on the modern western (the poster design seen here looks like The Inglorious Seven), but as much as we'd like to put as much blame on him as possible, Fuqua has always made hyper-violent films, and it shouldn't be a surprise that he gets carried away with the lawless machismo of the old west. As is too often the case with action pictures, the question of why group A's bloodlust is heroic as opposed to group B's evil bloodlust becomes difficult to reconcile at times, and the slapdash approach to character motivation makes this a bit of an extreme case.

One of the biggest distinctions and chief pleasures the movie has to offer is the final score by the late, great James Horner, and two tracks in particular ("Seven Riders" and "Faraday's Ride") are so good the make you cry and pump your fist at the same tie, but it's a little sad to see it overshadowed by use of Elmer Bernstein's classic theme at the end. But what other choice was there? You really can't make The Maginificent Seven without that theme. It would be like doing Mission: Impossible and leaving out Lalo Schifrin. The result is that we get to mourn for two cinematic music legends for the price of one.

What makes The Magnificent Seven overall work as a flawed but entertaining piece of popcorn entertainment is that, unlike most of the westerns seen in recent years, it has a sense of fun. This will likely be enough to entertain most audiences, and may well even bring us back for a second viewing. But it's too bad the effort  wasn't made to create a deeper, more resonant film. To use the ultimate cliche for discussing a remake, it's not as good as its predecessor. And that's too bad. While it's a perfectly serviceable action film, the talent was there to make this something truly special. Townsfolk.