Interview with Dilu Miah and Kain Francis, Star Wars Puppeteer Actors Who Were In The Force Awakens 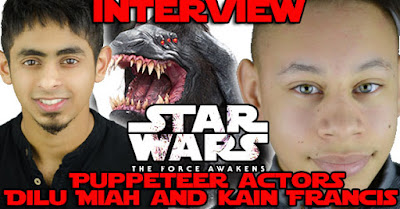 While at the Geekedfest comic con in Newport, South Wales this weekend I caught up with Dilu Miah and Kain Francis who were both puppeteer actors on Star Wars The Force Awakens.  I had a wonderful chat with the pair as they divulged their time on set at Pinewood Studios.  They reveal how J.J. Abrams was a great motivator, how on a Friday after a long week of shooting they would have a dance even with Daisy Ridley and how they got the roles for the biggest movie of all time.  They also reveal what happens if you take photos on set and try to share Star Wars secrets with the world and what their funniest moments were on their three week shoot for The Force Awakens (Hint: back flips on request for Simon Pegg.)

You can listen to the interview below: