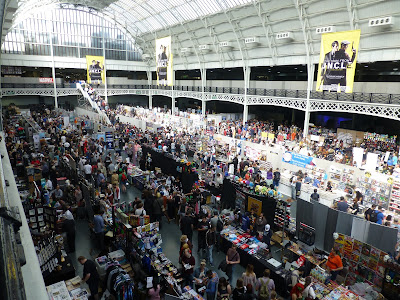 There have been some big comic cons this year, Star Wars Celebration, London Film & Comic Con and of course the big one, the San Diego Comic Con.  But there are still plenty to look forward to this year including Destination Star Trek in Birmingham, UK and MCM London Comic Con.  The crowds will be huge but the guest line up will be too.  If you're thinking of attending one of these events here are my top five handy tips to get the most out of these events:

5 - Get There Early
Get to a comic con as early as possible.  Especially if you have an early photoshoot.  Most of the time the doors open at 9am and photoshoots can start as early as 9:15.  Turning up ten minutes before is a sure way of you missing that first appointment with your favourite guest.   Get there at least two hours before to guarantee an early entry.  If you do turn up late and have a photoshoot ask a member of staff if you can be fast tracked through. 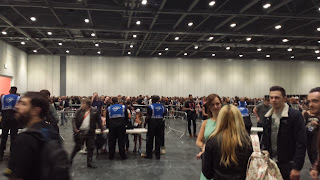 4 - Do Your Research
Turning up to a Comic Con with no prior knowledge will probably lead to a lot of frustration.  Normally on the organiser's website they've published not only the schedule but a floor plan too.  Some events will even provide a handy app for your phone or tablet.  Star Wars Celebration did this and it was invaluable.  Even if they don't, take photos  on your phone of the floor plans and schedules when they become available.

Also figuring out which session your photoshoot is likely to be in is always an essential thing to do.  Organisers of the event you're attending will more than likely have a forum and these are easily one of the best ways to get prepared for the event.  You are certain to get your questions answered there.

3 - Be Prepared To Be Warm
It's going to be warm at these events.  With so many in attendance the air by midday will be warm and if you're queueing for a photoshoot surrounded by people it can get seriously uncomfortable.  Take plenty of water, a mini fan and even a can of cooling spray.  Oh!  Also deodorant is essential.  Think of your fellow geeks and the guests.  On a side note, take some First Defence or equivalent with you.  You will get coughed and sneezed on. 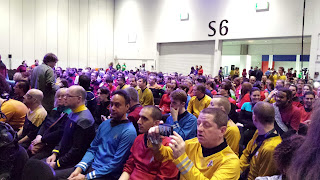 2 - Wear Comfortable Shoes
That is an obvious one but make your shoes even more comfortable by buying insoles to help with the constant walking and the inevitable standing around in queues.  Unless you are in cosplay in which case I commend your commitment.

1 - Pace Yourself
With so many guests being announced for one event such as Destination Star Trek it can be tempting to overbook.  You could end up having ten photoshoots in a day.  Don't forget a lot of the time the schedule isn't released until a week before the event so you could end up with an impossible task.  Also I have seen a few people faint over a comic con weekend due to lack of water and food.  Take food with you and plenty of water.  A cereal bar or banana are an excellent emergency food.  I'm diabetic and I always make sure I have my essentials with me.  Don't rely on other people to provide these things.

Most importantly have fun.  I'll see you at the next event which for me will be Destination Star Trek in October.

for a great resource for finding and planning conventions visit Eventbrite's conference page. 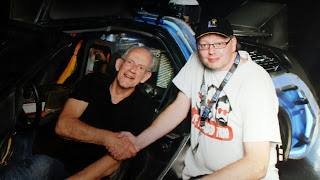