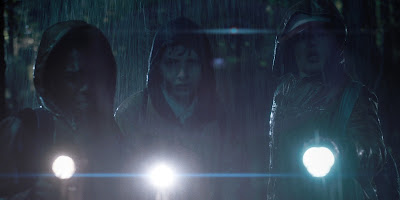 The new Netflix original production, Stranger Things is a love letter to the ’80s supernatural classics that captivated a generation.  With quite a bit of influnence from 80s Steven Spielberg, Stranger Things is set in  1983 Indiana, where a young boy vanishes into thin  air. As friends, family and local police search for  answers, they are drawn into an extraordinary  mystery involving top ­secret government  experiments, terrifying supernatural forces and one  very strange little girl.

●      To help sell the show, the Duffers edited a mock “trailer” the combined clips from over 25 feature films, including ​E.T​., ​Nightmare on Elm Street​, ​Super 8​, and Halloween​.
●      The composers of the ​Stranger Things​ soundtrack (Michael Stein and Kyle Dixon) were two members of an Austin synth band called SURVIVE; their music was featured in the soundtrack of the film ​The Guest​. This is how the Duffers initially discovered them. Michael and Kyle both quit their day jobs in order to work on the show.
●      The composers (Michael Stein and Kyle Dixon) have written over 13 hours of music for the show. 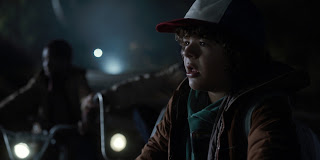 ●      Winona Ryder wanted her hairstyle modeled after Meryl Streep’s hair in Silkwood​.
●      Winona Ryder and Matthew Modine have appeared together once before: in the music video for Roy Orbison’s “A Love So Beautiful.”
●      The title sequence was inspired by the work of Richard Greenberg, who designed a number of classic 80s title sequences (including ​Alien​, ​Altered States​, Superman​, and ​The Goonies​).
●      Gaten (Dustin) and Caleb (Lucas) both acted on Broadway; Gaten played
Gavroche in ​Les Miserables​, and Caleb played Young Simba in ​The Lion King​. The two boys knew each other but they didn’t become close friends until after working on ​Stranger Things​.
●      Millie Brown (who plays Eleven) and Charlie Heaton (who plays Jonathan) are both from the UK.
●      Gaten’s voice changed so much by the time production ended that the sound team was unable to use him for ADR (additional dialogue recording).
●      Before starting the show, the writers all watched (or rewatched) a large list of films, including ​E.T.​, ​Stand By Me​, ​The Goonies​, ​The Thing​, and ​A Nightmare on Elm Street​.
●      The Duffers had all the boys audition with scenes from ​Stand By Me​.
●      To help sell the show, the Duffers created a “look book” which was designed in the style of a vintage Stephen King novel.
●      Although the show was shot digitally on the RED Dragon, a layer of real film grain was applied to help achieve a more vintage look.
●      It was Caleb’s request to wear a camouflage bandana in the show; he wears it for the final three episodes. 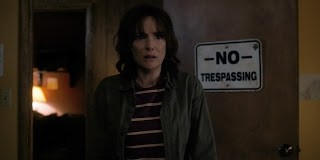 ●      The monster was achieved through a combination of prosthetics, animatronics, performance, and CG.
●      The toddlers on set were very scared by the “monster,” but they were calmed when told that he was just like the monsters in ​Monster, Inc​.
●      To get Millie to float in a kiddie pool, twelve hundred pounds of epsom salt were dissolved into the water.
●      Millie had to shave most of her hair off for the show. As can be expected of any
11­year old girl, this was a terrifying prospect. The Duffers showed her how cool Charlize Theron looked in ​Mad Max: Fury Road​, after which Millie agreed to it.
●      Finn Wolfhard is a film buff and wants to be a director when he grows up. He is a particular fan of Sam Raimi’s early work.
●      Hopper’s trailer was purchased by the art department for $1.
●      For some of the laboratory scenes, Millie (Eleven) was fully submerged in an underwater immersion tank. She was able to breathe by wearing a Sea Trek helmet, which weighs approximately 70 lbs above water; it weighs 15 lbs beneath the surface of the water. The helmet was designed for shallow “underwater walking.”
●      To direct Millie while she was underwater, the Duffers communicated with her through a small radio in her ear.