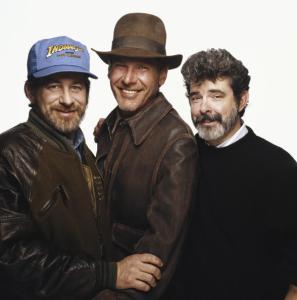 At a press gathering to promote Steven Spielberg's The BFG, the director was asked about Indiana Jones 5 and if George Lucas would have any involvement in the project. Spielberg replied:

"George is gonna to be an executive producer on it with me. ... I would never make an Indiana Jones film without George Lucas. That'd be insane."

So we are likely to see a project involving The Bearded Trio and it's an Indiana Jones project too. John Williams, Steven Spielberg and George Lucas will all be involved in some way. Spielberg also recently revealed that John Williams will be on board for Indy V.

It's not sure how much involvement Lucas will have, it's likely he will have an advisory role but it will be great to see the three together once more.