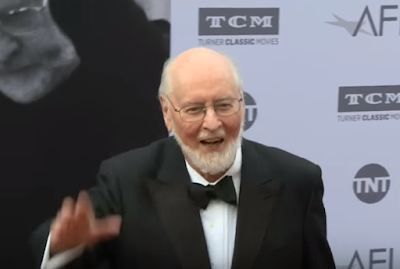 Composer John Williams was honoured by Hollywood Thursday for a glittering and stunning career spanning seven decades of classic film scores, including his most famous work on "Star Wars" and "Jaws." 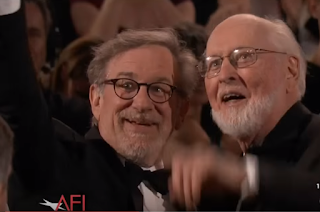 “Without John Williams, bikes don’t really fly. Nor do brooms in Quidditch matches. Nor do men in red capes. There is no Force. Dinosaurs do not walk the earth. We do not wonder. We do not weep. We do not believe,”

The other of the Bearded Trio was also present, George Lucas:

“You see, Star Wars was meant to be a simple hero’s journey; a fantasy for young people,” he said. “And then John wrote the music and he raised it to a level of popular art that would stand the test of time...What I’m trying to say is you made my life so easy. I had so many ideas for other movies, but I never got to them because you ensured that Star Wars would last forever and then you did it again with Raiders of the Lost Ark. A long, long time ago, Steven [Spielberg] and I sat on the beach to talk about the story of Indy and, instantly, we both said at the same time, ‘John has to write the music.’ Steve said, ‘Right. that’s the most important part. Let’s go have lunch and we can write the story later.’”

Another director present was Richard Donner who took the opportunity to tell John Williams “The first cue he did was the titles and when the title ‘Superman’ came across the screen, his music said Superman. I couldn’t believe it. I went home. I took the rest of the week off.”

Tom Hanks was also at the awards and had this to say about the composer as he hummed some of his most memorable themes including Jaws and Close Encounters of the Third Kind:

“How much of John Williams’ music needs only to be heard? The visuals are nice, but not always necessary because John’s music has a singular authenticity that stirs our synapses. How much do you need? A few bars? Not even. A few notes...And just like that we remember where we were and what we were doing when we heard that music for the very first time.” 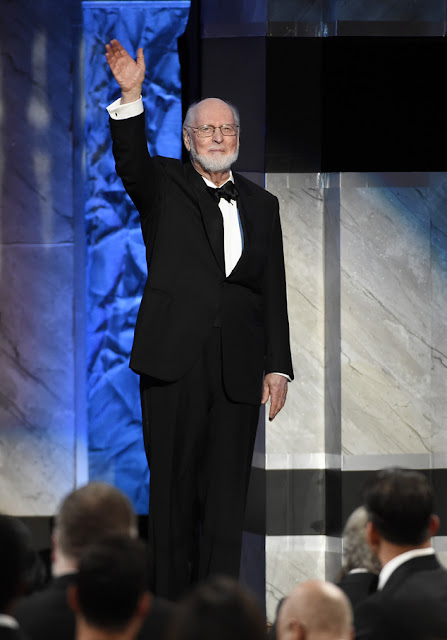 Many stars of Hollywood congratulated Williams and showed their love for his music including Daisey Ridley, Mark Hamill and Harrison Ford who hummed the Indiana Jones theme as he walked on stage.  He said:

“That damn music follows me everywhere. They play it every time I walk on a stage, every time I walk off  a stage…it was playing in the operating room when I went in for my colonoscopy.”  The star of Star Wars and of course Indiana Jones also shared "To play a character graced by John’s music is, of course, a real gift.” He went on to cite “Marion’s Theme,” which plays as Indiana Jones fears his lover has been killed. “It invites the audience’s emotional involvement. It encourages us to feel. It’s an example of entertainment elevated to art. John, you’re a genius.”

John Williams was his humble self and said during his acceptance speech:

“Once I get over being stunned, I will treasure this night always.  Tomorrow morning, when I’m back at work, I will try to deserve all of this."

The award was long overdue for the composer that has been the soundtrack to many people's lives over the decades.  Congratulations John and thank you.