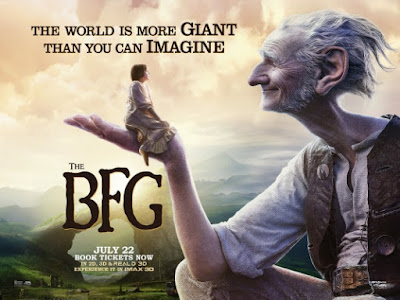 
It's expecting too much that the new collaboration between the director and screenwriter of E.T. - The Extra-Terrestrial would equal that film, a genuine masterpiece that ranks among the greatest films ever made. That said, The BFG manages to be a worthy reunion for Steven Spielberg and the late Melissa Mathison which offers a delightful and sweet story, breathtaking effects and production design, and a soulful performance by recent Oscar-winner and celebrated stage actor Mark Rylance in the title role. Okay, admittedly this is a review by two lifelong Spielberg devotees writing for a site devoted largely to Spielberg films. Of course we liked it. But The BFG is so charming and so joyous that you don't have to be a fan to be caught up in its spell. 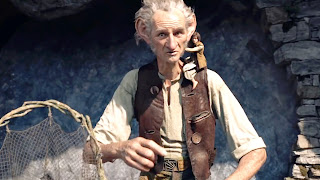 Based on the beloved children's book by the late Roald Dahl (Charlie and the Chocolate Factory,  Matilda, James and the Giant Peach,  The Fantastic Mr. Fox), The BFG tells the story of Sophie (Ruby Barnhill), a lonely 9-year old girl living in a British orphanage. Late one night (in a sequence that stylistically recalls the first act of Spielberg's Hook) Sophie sees the hand of a giant and, unable to risk her telling other humans of her world, the giant (Rylance) grabs Sophie through her window and carries her off to
"Giant Country".

Spielberg has remarked that if he made Hook today modern animation technology would allow him to much better realize the wonder of Neverland, and in more than one sequence, the spectacular design work by Rick Cafter and Robert Stromberg, coupled with amazing effects by Joe Letteri and WETA digital, gives us a taste of what he might have done. Giant Country is a visual marvel, offering a look and atmosphere that is equal parts James Cameron's Pandora and classic Disney animation. Much has been made of Spielberg directing his first film under the Disney label, and the result is a near perfect marriage of the two most iconic names in family films.

The motion capture characters are as smoothly rendered as in Spielberg's The Adventures of Tintin, and again the stylized look avoids the "Uncanny Valley" problem that sometimes plagues motion capture films. 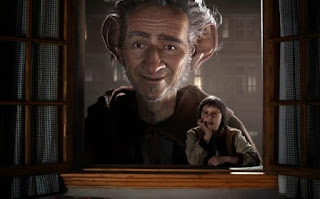 But the effects wouldn't mean anything without the humanity (or whatever the giant equivalent is) that Rylance brings to role of the BFG. Endearing and expressive, Rylance is at once larger than life and beautifully understated, speaking Roald Dahl's "Gobblefunk" so effortlessly you'd think it was his native tongue. This is a role that could have easily gone to a big name comedian, and someone like that might have over-milked it and settled for mugging and shtick, but Rylance treats the BFG as a complex, well-rounded character. It's easy to understand why he's so quickly become a Spielberg favorite.  And Barnhill is thoroughly and utterly charming as Sophie, and the gentle relationship that develops between the two lonely souls is made considerably more poignant by their chemistry (a chemistry made possible by the fact that the actors were on set together, acting off of each other in the moment,thanks to motion capture.). The man-eating giants who act as the film's villains are also highly entertaining, particularly Jemaine Clement of Flight of the Conchords as the vicious but not very bright leader, Fleshlumpeater. And Penelope Wilton nearly steals the film's third act in her turn as the Queen of England (apparently Elizabeth II, as the film is vaguely set in the early 1980's, when the book was released.). 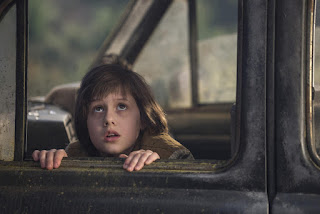 Spielberg and Mathison have taken a few liberties with the source material, adding a backstory which enhances the character arcs of both Sophie and the BFG, and also ads needed gravity to the threat of the bad giants without having to go as dark and gruesome as Dahl did is his descriptions of children being eaten. But fans are likely to be very pleased with the level of faithfulness to the book, and certainly the spirit of Dahl's creation is translated well, with Spielberg admirably resisting the temptation to contemporize  or Hollywoodize the material. Spielberg is much more subtle about mixing his own personality with Dahl than Tim Burton or Wes Anderson were (for the record, we loved both of those films, too, but especially Mr. Fox was a different animal), and it predictably manifests primarily in an emphasis on tugging at the heartstrings. We're just going to flat out say it: this is a case where the movie is indeed better than the book, and it's not because it wasn't a good book, the movie is just so . . . so . . . well, scrum-diddly-umptious.

There's too much top notch work on display here to single out everything, but we'd be remiss if we didn't mention Janusz Kaminiski's storybook cinematography and of course, the whimsical and wondrous score by the legendary John Willliams.

If you're looking for something refreshingly different than the norm in theaters this summer, The BFG is the ticket, whether you're going as a family or by yourself.