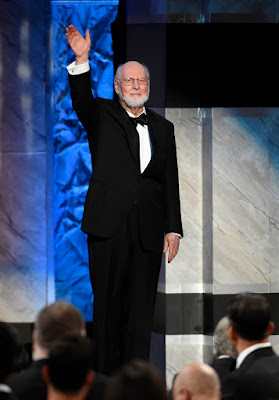 Back in March we were delighted to here the news that the man in the hat will be coming back for his fifth installment.  Yes Indiana Jones is returning to the big screen and last night at the AFI Life Achievement Award for John Williams it was also confirmed that the composer will be back to perform his magic once more.  Now that is good news.


You can check out our article on last nights awards along with a bonus post with photos from the event.

John Williams returning for another Indiana Jones movie makes me really excited, even more than for Star Wars The Force Awakens.  Whether you liked Indiana Jones and Kingdom of the Crystal Skull or not, one thing you have to agree is the soundtrack was top quality.  If you're not excited for Indy V at least there's another John Williams soundtrack on the way and that...that is no bad thing.  To remind you (You probably don't need reminding) how good he is here's the desert chase scene from Raiders of the Lost Ark.  Simply brilliant!