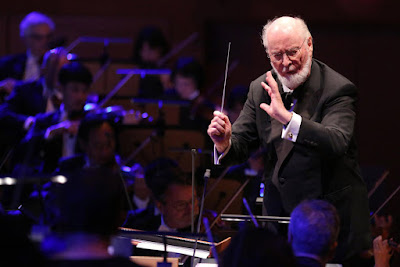 I was 11 when JAWS premiered in 1975. I did not know who John Williams was or much about movies. two hours after seeing the movie I did understand the power of the score of a movie. If you are old enough to remember you will know what I mean when I say that just the thought of swimming in a lake or a river, let alone the ocean was terrifying after the movie came out. The fear of a creature the size of a school bus eating you will have that effect. Or was it something else? I could not understand it at the time but it was not the shark itself. Or even the fantastic job Steven Spielberg did putting together the wonderful film we see without the shark even working right. It was the sound, but more specifically the soundtrack. The main title set the tone of the whole film with its melodic ocean themes that hinted that there was something in the water, something for us to fear. Then we heard da....dum.....da....dum.....dadumdadumdadum..... then something bad happens.

variation of his same theme. Halloween, Friday the 13th and others took that primal fear created in the one bit of music. When latest horror movie arrived at the theater audiences became accustom that the musical Que meant the bad guy in a mask was coming. Whether he did or not the effect was the same. Shrieks, screams and yells filled the theater.

Three years later in 1978, not 1977. I was in a church on the edge of the Grand Canyon. We sat in the old metal seats they had in rows. It was not very comfortable and I thought it was funny that I could see the wires which ran from the projector that was in the back of the room, like a school projector, to the speakers scattered around the room. I finally saw the movie that opened my eyes completely to the world of cinema. STAR WARS!! I was dumbfounded and thunderstruck all at once. By the time the Star Destroyer had finished flying over my head, It was like modern 3D, I felt like it was really cruising over my head. I was completely hooked, but not just by the struggle between the Republic and the Empire but by the music itself. It was safe to say that I knew who John Williams was after it ended.

The power, the size and scope of the music in the Star Wars Saga. How the dialog and visuals were tied together in that journey with the music. Recreating the scenes in my head as I play the score on CD. John Williams is cinema. His soundtracks resonate beyond the movies themselves. The feelings and emotions we get watching those movies come out of his unforgettable work. From Jaws to Star Wars and Superman. From Schindler's to JFK. From Home Alone to Adventures of Tin Tin. The list goes on from genre to genre. So many classic film made better by a musical Storyteller.