Star Wars Behind The Magic. A Look Back At The Insider’s Guide #MayThe4thBeWithYou 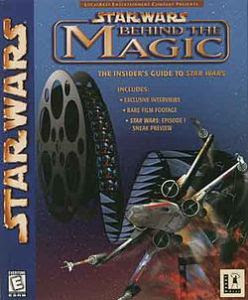 Way back In 1998 the Star Wars buzz was back mainly thanks to the imminent arrival of Episode One. The Internet screeched at 56K all around the world as fans tried to find out that little bit of information about the upcoming movie and Star Wars in general. Video clips would take an age to load and when they did they were low resolution and in a small window on your screen. The web was a wonderful place for information even back then but for the multimedia experience, CD-ROM was still the way to go to get a true audio and visual experience.

Imagine my excitement when I got my hands on Lucasarts’ Star Wars Behind The Magic. Two CD-ROM’s packed with more information on Star Wars than I had ever seen before, plus on disc one was a preview of The Phantom Menace. The discs were packed with photos from the Lucasfilm archives
and footage never before seen including that now famous lost “Biggs scene” from A New Hope. My favourite though was the raw footage of the Cantina scene with the original soundtrack. I loved the cockney bar tender. It was thanks to Behind The Magic that I first discovered that the Cantina Scene was actually filmed twice. George Lucas was not happy with the footage first shot in London so went back and filmed the scene at a soundstage in Los Angeles. I just wish he had left the cockney bar tender in.

Loading up the first disc you are greeted by a wonderful introduction. The familiar Star Wars music blasted out from my SoundBlaster soundcard and speakers with a montage of clips from the original trilogy. I still get goose bumps watching it. Fortunately somebody has uploaded the intro to YouTube for you to enjoy.

After that introduction I couldn’t wait to explore the discs. The presentation was outstanding. On the left were all the categories for the two discs. The categories were Characters, Technology, Locations, Events and the Episode 1 preview. Disc 2 had Scene by Scene where you had a complete breakdown of each scene from A New Hope, Empire Strikes Back and Return of the Jedi. Behind The Scenes was one of my favourite categories with photo after photo of the making of the Star Wars movies and packed with video clips too.

The Expanded Universe was also represented and this I used a lot for cross referencing my Kenner Star Wars collection. Every figure was represented with a photo and some useful information on each one. It was like a virtual Steve Sansweet book. In fact it was Steve Sansweet who contributed to this section, sharing the impressive collection he had acquired even back in 1998. The last category was Glossary so you could look up every word relating to Star Wars.

The information packed on to these discs was simply incredible. Selecting a category such as technology and then vehicles you could find out all the information you need on say a Speeder Bike. You would have options such as a full description of the bike or a gallery including a 3D model that would rotate so you can see every angle of the bike. You even got audio to hear the familiar sound of the bike and a video showing of course the speeder bike chase and Leia falling from her bike. It truly was a multimedia experience. This title alone justified me buying my 8x CD-ROM drive and 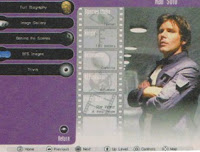 Just like Wikipedia today you could start looking at one article and then you could click on something related or in the same category. Before you know it you’ve gone from looking at Speeder Bikes to a Princess Leia fashion show. Yes you read that right. On the discs were some funny 3D rendered scenes made especially for Behind The Magic. As mentioned we had a Leia fashion show which showed Princess Leia in her various costumes on a virtual catwalk with cameras flashing all around.

We were also treated to a weapons test where you could fire various weapons from Star Wars at a poor innocent Stormtrooper. I did feel sorry for the little chap especially when you got to test the Death Star’s ultimate weapon!

The best of these animations though was the virtual tour of the Millennium Falcon. Painstakingly recreated for the CD-ROM which was designed by artist, Dan Colon and David West Reynolds. For the first time ever, you could walk around a fully rendered Millennium Falcon stopping at various points to find out exactly what each component did. It was incredible! 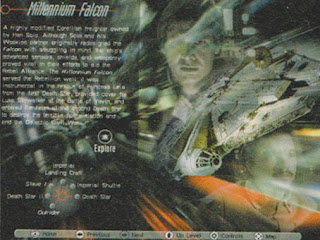 Even with today’s Internet and easy access to video clips, photos and a barrage of information, if Disney or Lucasfilm were to bring out a Star Wars Behind The Magic DVD for my PC or Mac I would buy it. If they kept the same quality as its 1998 counterpart it would be essential for any Star Wars fan.

Star Wars Behind The Magic is quite easy to get hold of with copies available on Ebay and Amazon but be warned it can be tricky to get it to work on a modern PC. A little bit of configuration is required to get a 17-year-old piece of software to work happily on a Windows 7 machine. With the recent releases of classic Lucasarts titles on GMG and Steam, I think Star Wars Behind The Magic should be considered for a re-release. Yes, some of the information would be out of date and inaccurate due to further developments within the Star Wars universe but just to be able to witness the magic of Behind The Magic once more would be worth it.