Why Star Wars And Star Trek Need Each Other 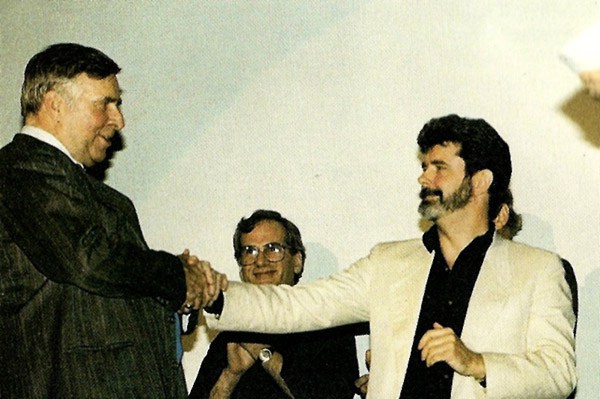 I’m proud to call myself a Star wars fan and also a Star Trek fan.
Ever since I was a child, and particularly with the advent of the internet, the two franchises have generally been seen as two camps. Either you’re a Star Wars fan or a Star Trek fan. You can’t be in both camps is the general consensus with fans. I’ve seen fans at comic cons get quite irate explaining why their love for their chosen franchise is better than the other one. This could be seen as just passionate and there’s nothing wrong with that. But there is definitely a more serious side to the fan base and sometimes a little ugly. On The Bearded Trio site we cover Star Wars and Star Trek.  I’ve had emails from Star Wars fans asking why I have Star Trek material on my site and that I should stop. I’ve even been called a traitor. I’m always happy to explain that I love both Star Wars and Star Trek equally and the two are in my opinion closer than most people think.

Yes there are huge differences between the two. That part is obvious. Star Wars is set in another galaxy while Star Trek is set in ours. One can be described as science fantasy while the other is science fiction or even a space opera. I’ve had Fans approach me and explain that the two are completely separate and one never needed the other.

But in reality if we look at the history of the two franchises they’ve definitely needed each other. Let’s first look at Star Wars needing the federation. Without Star Trek, Star Wars would have had great difficulty in taking off. George Lucas himself said in the Trek Nation documentary:


‘Star Trek softened up the entertainment arena so that Star Wars could come along and stand on its shoulders.’‘There was an effective group of people in the beginning who accepted it… that it wasn’t that far out. For the studios it was way far out, [they said] ‘what is this?’ but there was a fanbase out there – primarily the Star Trek fanbase -who understood sci-fi, understood visual sci-fi, and was ready for something like [Star Wars] to be in the feature arena.’

George Lucas considers himself a ‘Trekkie’ according to the book ‘Skywalking: The Life And Films Of George Lucas’ and has cited Star Trek as his inspiration for working with sci-fi. He also finds hypothetical “war” scenarios distasteful.

the original series on TV and nothing more.Looking at the flip side of the coin and why Star Trek needed Star Wars we have to go back to the release of Star Wars in 1977. The huge success of the movie saw Paramount scrambling to bring their Star Trek back and ride on the success of Star Wars. Initial plans were to bring it back to TV called Star Trek: Phase Two but this was scrapped in favour of a movie. Leonard Nimoy who played Spock said himself on the documentary ‘Star Trek: The Captain’s Summit’ ‘we all owe a big thanks to George Lucas.’


“I like Star Wars. It was young King Arthur growing up, slay-slaying the evil emperor finally. There’s nothing wrong with that kind of entertainment.”

Again if it’s good enough for Gene its good enough for me.
Behind the scenes the two franchises have crossed paths. Industrial Light & Magic helped bring the magic of Star Trek to the big screen. Who can forget that magical Genesis scene from Star Trek II: The Wrath of Khan?

J.J. Abrams was called upon to direct Star Wars VII after displaying his ability with a huge franchise and directing two Star Trek movies.

Perhaps it’s only natural to be pigeon-holed into one camp or the other. I’ve seen it in other fandoms too. Back in the eighties I had a Sinclair Spectrum computer. Instantly it was assumed I hated the Commodore 64 by my friends in school as that was the assumption in those days. I didn’t, I loved both. That still continues today with the Xbox and Playstation. Pepsi and Coca Cola, Android or iOS or even cats and dogs. Friendly rivalry is healthy but I also think there is nothing wrong with loving both if the quality is there and when it comes to Star Trek and Star Wars it’s definitely there. So I have no issues with showing my love for the two. They are both important to me and both act as a comfort blanket. The only problem is choosing which one to watch.

Thank you George and thank you Gene.
Live long and prosper, may the Force be with you all