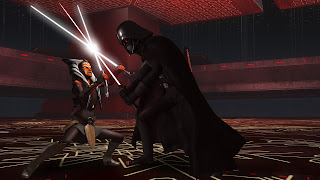 The season 2 finale of Star Wars Rebels was some of the best Star Wars we’ve gotten ever. Bold statement I know, but it’s true in my opinion. As soon as it was over, I needed to write about it; I needed to talk about it with anyone who was willing to discuss it. There’s so much to talk about! Twitter feeds blew up. Facebook posts on the finale dominated my Facebook page. I wanted to write about it, but I knew that it needed multiple viewings and notes needed to be taken. There were just too many thoughts going through my head as I watched. So here are some of the thoughts I jotted down while watching. Enough talk let’s get on with.

Okay so my first thought is how much this episode of Star Wars Rebels mirrored not only Star Wars: Episode V The Empire Strikes Back,  as Dave Filoni has said at the Season 2 Finale Red Carpet, that this is “The Empire Strikes Back of our story so far”, (what better Star Wars film than The Empire Strikes Back to model an episode of Rebels after?) but how much of Ezra’s dialogue with Maul resembles Luke’s Dialogue with Yoda. Listen to Maul when Ezra approaches him: “Please put your weapon away, I mean you no harm.” That’s almost word for word what Yoda says to Luke on Dagobah. It continues as Maul asks Ezra “Why are you here?”, and then answers his own question by saying “You seek knowledge”. Again, this is nearly identical to Yoda asking Luke, “Tell me, why are you here?”, and then answering him by saying, “Yoda, you seek Yoda. Take you to him I will”, just as Maul takes Ezra to the Sith Temple. I love how the cast and crew of Rebels continue to tie in and take bits and pieces of other Star Wars films to connect everything together. It helps inform the events of later films through an entirely new lens.

Did anyone think about the obelisk in 2001: A Space Odyssey when Kanan, Ahsoka, and Ezra approached the pillars with the “ancient tongue”? I sure did. It both cases they are trying to communicate a message from another time and place. The only difference is that the pillar on Rebels had text on them, while the obelisks in 2001 used sound. Just a thought. 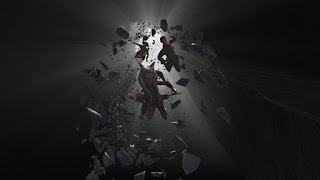 Moving further along, I found it a little confusing when the three Jedi fell through different layers to deeper and darker depths of Malachor. As I researched this on starwars.com databank, it stated that “Dave Filoni drew heavily on mythological depictions of the internal underworld delineating specific levels of descent.” I just love how much thought and influence goes into making Rebels. As we see in the episode Ezra reaches the furthest depths of Malachor and is confronted by Maul. At this point, Maul is at his lowest. The lighting in this part of the episode is so dark that it’s nearly impossible to see Maul at times. All we see is a dark shape with a voice that hasn’t been used in a long time. Maul is the shadow, the inquisitors seek, literally and figuratively.

Speaking of Maul and Ezra, what would’ve happened if Ezra refused Maul’s machinations? Most likely Maul would’ve battled Ezra, but would Ezra find the knowledge he sought after? This brings me to another question: Does Ezra know where to draw the line? Or will he do whatever it takes to get the job done? He must realize he is following a former Sith Lord inside the Temple to retrieve the forbidden knowledge. Maul remembers his teachings at the hands if Darth Sidious, and uses this same technique to lure Ezra to do his bidding. Maul tries to get Ezra to kill the Seventh Sister, but Ezra is unable to follow through on the dark deed, which causes Maul to do it himself. Kanan has reservations about allowing Ezra to go with Maul, and rightly so. Even though Ahsoka believes Ezra will be fine because Kanan trained him right, if I was Kanan I wouldn’t be so happy about it either. It’s pretty obvious by the end of the episode that Ezra has touched the dark side by being able to open the Sith Holocron. “Only a Sith, or one who thinks like a sith can open the Holocron.”

Enter Darth Vader. James Earl Jones’ voice in this episode sounded more like the Vader we all know from the original trilogy. The dialogue Vader has with Ezra is ominous and foreboding. This version of Vader is also the most active version we’ve seen ever. His powerful slashes with his lightsaber continue to pound away at Ahsoka and Ezra respectively. When Ahsoka attacks Vader from behind and Vader lets out the “aaaah”, that really reminded me of when Luke defeated Vader on the second Death Star in Return of the Jedi. I wouldn’t be surprised if that bit of sound was taken directly from the archives. Taylor Gray’s voice acting in this episode was absolutely phenomenal, as well as Freddie Prinze Jr.’s. I really felt like Kanan had a greater sense of urgency in his voice after he got blinded by Maul. I really believe despite Kanan being blinded, he can see through the Force better now than ever. “Your eyes can deceive you, don’t trust them.” I cannot leave out the animation department. The facial expression on Ahsoka’s face after Vader calls her name was amazing. When she says “Anakin” was gut wrenching. I also found it fascinating when Vader says to Ahsoka “Then you will die”, it’s Matt Lanter’s voice saying it and not James Earl Jones. That makes it so much more affective, when it’s Anakin saying it and not Vader. Yes I know Anakin at this point is gone. Filoni and gang have made it clear that the only person that will be able to bring Anakin back from the depths of darkness is his only son, Luke.

So where does this leave us? Kanan is now blind; he now wears a blindfold over his eyes, which is connected to a Lobot-like device on each side of his head. Kanan is now a full-fledged Jedi, and not the cowboy Jedi we see in the “Spark of Rebellion”. Ezra is starting to realize his potential, good or bad we shall see. And for what it’s worth, Ahsoka is alive in my opinion. Even though it has been stated that her story as of Rebels is over, we haven’t seen the last of her or Maul, who escaped Malachor in an Inquisitor TIE Fighter. Then there’s Vader who we see leaving the Sith Temple after the battle with Ahsoka. Who knows if we’ll see Vader in Season 3 of Rebels. This could be the last time we see him until Star Wars Rogue One. With each appearance in a television series, film, or comic book, the tragedy of Vader continues.