Film & Comic Con Cardiff took place over the weekend at the Motorpoint Arena and it was another fine event organised by Showmasters. 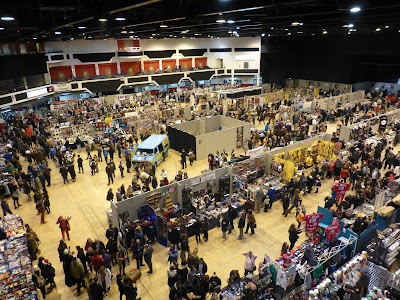 It wasn't the biggest event even compared to past Cardiff comic cons but that didn't stop it from being an enjoyable experience.  I along with my wife turned up on the Saturday around 9:30 am and we more or less walked straight in.  The first thing we noticed that was different from previous Film & Comic Cons was the security.  Tables were setup at the entrance and staff were thoroughly checking bags.  We even saw a few police walking around.  This was the first time I've seen this at a 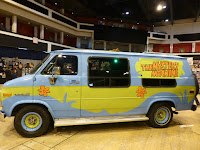 comic con.  After picking up our press passes and leaving our coats at the cloak room (£2 per item) we walked into the main arena.  The first thing that confronted us was the Mystery Machine van from Scooby Doo.  For a small fee you could have your photo taken sitting in the van.  We decided to just take a couple of photos of the van itself.

Since we were in before the 11 am crowd we took the opportunity to look around the stalls.  There were plenty of stalls and something for every collector.  I was looking for Reaction figures and realised that there were considerable less of these compared to recent comic cons but still managed to find some.  Gremlins and Back to the Future figures bought and a few books we then headed over to the autograph area.  Peter Mayhew who played Chewbacca was there but noticed his price for an autograph has gone up to £40.  Probably due to his work on Star Wars The Force Awakens.  Luckily I already had his autograph from a few years back (I only paid £15 then.)  Our mission was to talk to Ana-Maria Leonte who played Dasha Promenti in The Force Awakens.  I had already chatted to her on Facebook and set up an interview for this very site in a few months time so was looking forward to meeting her in person.  Sure enough she was as lovely in person as she was on Facebook and had some extremely interesting stories about her time on the set, her costume and the security involved in keeping the plot to The Force Awakens a secret.  We asked for a photo and she insisted on taking the photo herself.  Her selfie skills were second to none.  You can follow her on Twitter here. 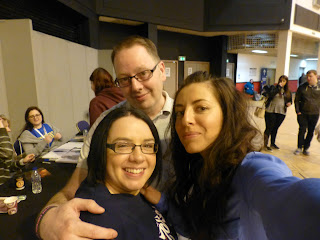 More looking around the stalls followed before taking in a lovely pasty from one of the food vendors.  It was surprisingly good and only £2.  That was it for the day for us.  We were here again tomorrow with friends and I was particularly tired so wanted to call it a day early to feel refreshed for Sunday.

My wife and I arrived around 10 am and this time we brought a few friends.  Like yesterday we were straight in after another search.  My friend headed straight for Peter Mayhew, his thought was he would get his autograph early before the crowds.  He was there and after paying £40 my friend came away looking a little displeased.  He said he never looked up and not once gave eye contact.  He didn't want to talk.  This was strange as the day before I had noticed Mayhew interacting with the fans and chatting away.  I think he must have caught him at a bad moment.  Still he was £40 lighter for that negative experience. 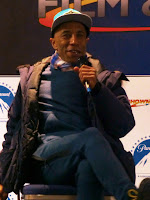 My wife and I noticed that Danny John-Jules had been pencilled in for a talk.  Apparently he wanted to do one so they added him last minute.  We headed up to the second floor.  There was staff at each floor who would guide us where to go.  We sat down for the talk and Danny John-Jules comes on stage vaping away.  A strange entrance.  As usual with these talks it was opened up to the audience to ask a question.  I thought I would get one in.  I asked him if there would be a sequel to the song he sang on Red Dwarf called 'Tounge Tied?'  He laughed and went on to explain how he tried to find out who has the rights to the original song as it's changed hands so many times.  He ultimately failed so has decided to record a new song called 'I'm going to get you little fishy.'  He played some of the work in progress on his phone.  It was actually really funny and I can't wait to hear the final piece.

After the talk the group I was with all decided to get a group photo with Rey's speeder from Star Wars The Force Awakens which was
located just by the entrance.  This was so much fun.  We each paid £5 and as it was a group photo we took it in turns moving around for each photo.  The staff were so helpful and so funny.  I really enjoyed this.  A credit to Showmasters.

We were almost done for the weekend.  A final walk around stopping for burger and chips from the food vendor.  The chips were lovely.  We headed upstairs once more for a walk around the artists and cosplay area and then for our final free talk, the Doctor Who panel.  This was busier than the previous talk.  Colin Baker was informative and at the same time funny.  You could tell he likes interacting with the fans. 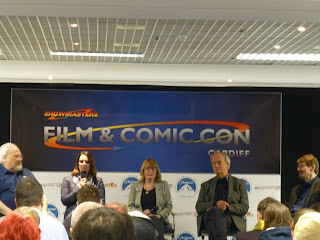 That was it.  We were done.  Not the busiest comic con I've been to.  Saturday was busier as usual and especially with Mother's Day on the Sunday I can imagine a lot of people had other plans.  But still a most enjoyable weekend.  Top marks once again to Showmasters who seem to have these events working like clockwork.  The staff were friendly and informative, the layout was perfect with three floors to play with and information displayed clearly.  As previously mentioned there was staff on all floors telling you where you needed to go.

Film &Comic Con Cardiff is always a pleasurable experience and this was no exception.  My only wish is for more guests for the next one.  You can find out where the next Showmasters event is by visiting their website.