Bridge of Spies and the Spielberg-Rockwell Connection

Steven Spielberg’s most recent film, Bridge of Spies, opens with an image borrowed from another great American artist. Spielberg’s camera winds through the rundown New York apartment of Soviet spy Rudolf Abel (Mark Rylance). He’s sat in silence, painting a picture of himself to indulge his artistic hobby. He’s flanked by two items: on his left, a mirror where he can see himself reflected; on his right, the canvas, on which he paints what he sees. It’s a clear nod to Norman Rockwell and his famous painting ‘Triple Self-Portrait’, a humorous, gently self-effacing piece that also touches on themes of identity (note how different the illustration is to the mirror reflection) and nationality (spot the American eagle on top of the mirror).
By drawing on the image of one of America’s most beloved artists (indeed one of its foremost chroniclers of what it means to be American), Spielberg introduces these issues (as well as a pervasive sense of paranoia) for the rest of Bridge of Spies explores. Here we find a dangerous spy integrated into American culture so fundamentally that he’s assimilating its icons. He’s a Commie ripping off a Rockwell! It’s almost a dark joke. But at the same time, he’s split, his identity fragmented both literally and metaphorically. In the privacy of his apartment, he hardly seems like a threat at all: nothing more than an old man with a hobby, just as Rockwell made himself seem in ‘Triple Self-Portrait’.
It’s a perfect Spielbergian piece of film-making: a single image that speaks volumes. Rockwell was no different. With just the single frame of the canvas to work within, he had to create images that conveyed (often very complex) meaning and story quickly and with maximum efficiency. No brushstroke could be wasted, no centimetre of space squandered. “I love to do a picture which shows a progression of action, a sequence of ideas at a glance,” Rockwell said. It’s a point echoed by Spielberg, who told Laurent Bouzereau in an interview dedicated to Rockwell’s work: “He did his storytelling in a flash; he did it with a single image. And he invites you to explore that image. He draws you into that image, and he invites you, once it makes an impression on you, to question why, simply question why.”
It’s this passion and deep appreciation for Rockwell’s work that inspired the Smithsonian American Art Museum to set up Tellin’ Stories, a 2010 exhibition of Rockwell paintings comprised primarily of works owned by Spielberg and friend, collaborator and fellow Rockwell enthusiast George Lucas. Their fascination in the painter, show curator Virginia Mecklenburg told the LA Times, offered a fresh perspective on his work. "There's a different lens for looking at Rockwell because of how George and Steven see their pictures," Mecklenburg explained. "They are both drawn to Rockwell's stories - the way an entire narrative unfolds because of how he crafts a single frame."
Lucas’s interest in Rockwell only truly manifests itself in American Graffiti, his melancholic, 50s set chronicle of the twilight point between youth and adulthood. For Spielberg, however, there are clearer parallels. Not only does he reference Rockwell in Bridge of Spies, he reconstructs another of his pieces in 1987’s overlooked masterpiece Empire of the Sun. The film, which tells the story of a young boy called Jim who’s separated from his family when the Japanese invade Shanghai in 1941, depicts a tender moment between Jim and his parents in which the adults are putting their child to bed. Lighting, blocking and framing are constructed specifically to homage Rockwell’s famous ‘Freedom from Fear’, but it’s no empty reference. 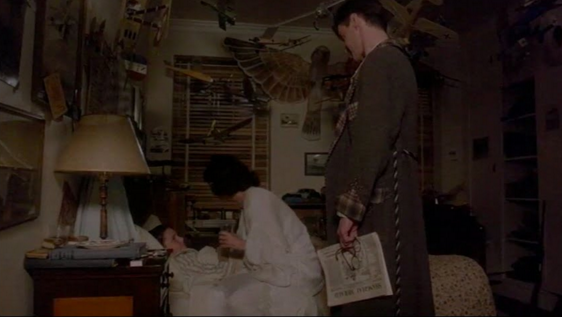 The image follows Jim through the film as he’s captured by the Japanese and held in an internment camp. It becomes his talisman, a representation of the safety he yearns for but which remains just out of his reach. It’s one of a number of American symbols that populate the film, including Hershey bars, issues of LIFE magazine, and a comic book about a daring flying ace. Like his reference in Bridge of Spies, Spielberg’s nod in Empire of the Sun suggests an identity crisis and a desire for a simpler, more comforting world that may not even exist. Both are perfect encapsulations of the sense of darkness that lurks behind the seemingly cosy exterior so many attribute to Spielberg’s (and Rockwell’s) work.
Even when that cosiness is entirely absent, Spielberg’s references to Rockwell are still very clear. One of the defining images from Schindler’s List is that of the girl in the red coat, who wanders through the streets as the Kraków ghetto is being liquidating by Nazi troops. It’s another key Spielbergian visual: a blend of darkness and innocence, the like of which he’d touched on many times prior to Schindler’s List and has tapped into many times since. But it also owes a debt to Rockwell’s famous 1964 painting ‘The Problem We All Live With’, which depicts young Ruby Bridges on her way to her all-white school, a racial slur daubed on a wall behind her.
Similar in composition and meaning, both images capture hatred in a single frame, and both act as an indictment of a society that’s failing to stop it. Indeed, with Rockwell putting the viewer in the same position as a crowd that hurls tomatoes and abuse at Bridges, his painting makes us complicit in this prejudice. Spielberg is no different, putting the viewer in the position of Oskar Schindler, riding on horseback and looking down at the streets below. The girl acts as a damning criticism of Schindler’s apathy, and also that of the audience. Just as he ignored the plight of the persecuted, so too had the American public who, by 1993, Spielberg believed were rapidly forgetting the lessons learned from the Holocaust. 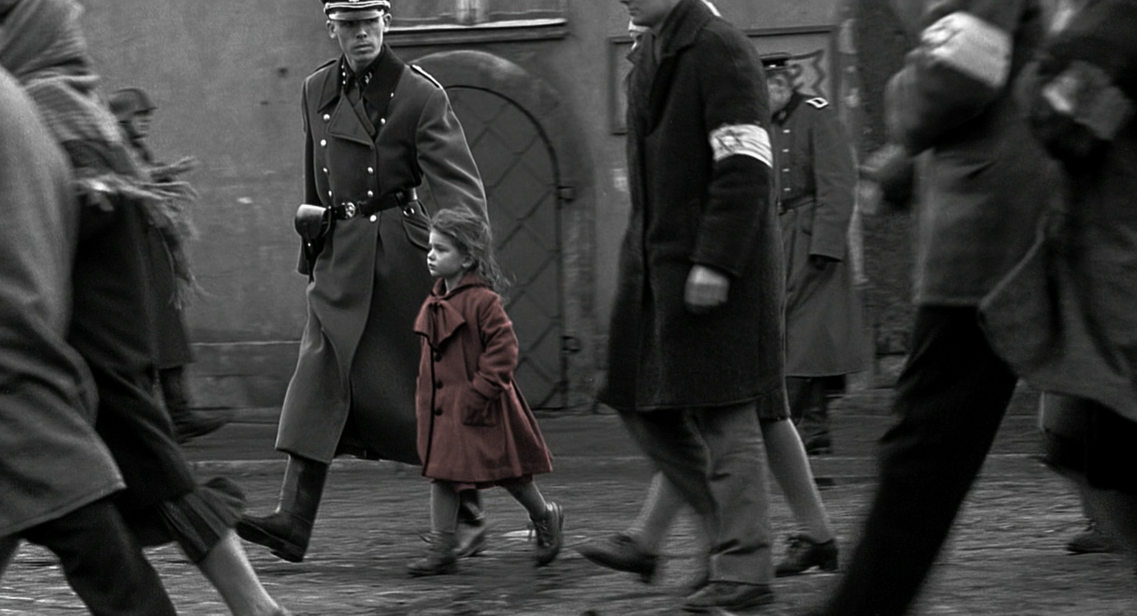 Beyond the specifics of direct film/painting comparisons, Spielberg shares a common bond with Rockwell in the way they both use the human face to convey the emotion of a scene. The concept of ‘The Spielberg Face’ has become well-known now, with Kevin B. Lee’s 2011 video essay noting in detail how Spielberg uses off-screen space and awestruck reactions to build a sense of wonder, anticipation, or fear within the audience. Think of Alan Grant reacting to the brachiosaurus in Jurassic Park, and consider how immediately anxious you became to actually see the dinosaur. That’s The Spielberg Face, and its effect, in action.
To ensure his paintings made maximum impact in minimum time, Rockwell employed similar tactics. In his 1956 work ‘Happy Birthday Miss Jones’, the artist depicts a spinster school teacher receiving a birthday treat from her pupils. Rockwell’s ‘camera’ is placed within the desks and looks towards Miss Jones, who stands by the blackboard. A few students can be seen, along with a collection of presents left on her desk and the words ‘Happy Birthday’ scrawled on her blackboard. It’s a touching image that relies heavily on Rockwell’s portrayal of Miss Jones herself. Standing at the head of class, she’s stiff and unmoving, trying to maintain her professional decorum. But her bowed head and warm smile speak of a deep affection and gratitude that captures how dearly she loves her class.
1947’s ‘Boy On High Dive’ is another expression of Rockwell’s fascination with the human face. Here, we find a young boy crouched on the end of a high diving board, daring to peek over its precipice. The image is dominated by three things: the sky, the high dive, and the boy’s terrified face as he looks at the drop before him. Spielberg owns the painting and it hangs in his Amblin office as a reminder of the film-making process. "For me, that painting represents every motion picture just before I commit to directing it,” he has said of the piece. “That painting spoke to me the second I saw it... I said not only is that going in my collection, but it's going in my office so I can look at it every day of my life."
There’s more than simple affection for the piece, and the work of Rockwell as a whole, at play here though. Whether it’s young Barry opening the doors to the alien visitors in Close Encounters of the Third Kind, Elliott looking up at his friend’s departing ship at the end of E.T., or David peering through the eye holes of a mask of his own face in A.I., Spielberg’s infatuation with facial expressions and single image stories is as significant and enduring as Rockwell’s. It’s what’s made both men such indelible chroniclers of the American (and indeed human) experience, and why they’ll always maintain that position. Movies can fade over time, the plot blurring from our memories. But moments, scenes, images - they’re the residue that sticks. And when they’re as strong as Spielberg’s and Rockwell’s are, that’s little surprise.
**************


Paul Bullock was introduced to the work of Steven Spielberg when dinosaurs roamed the earth. A childhood trip to Jurassic Park inspired him to film his own sequel to the movie, but when mouldy papier mache sets and un-cooperative action figure actors put paid to his silver screen dreams, he settled for a life of blog-writing instead. Paul can be found wittering about Spielberg on From Director Steven Spielberg, and pondering Spielberg, Disney, and general nonsense on Twitter: @paulbullock.