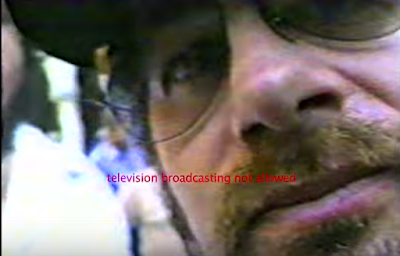 Here's a gem of a find.  It's Steven Spielberg who appears to be playing with a new camcorder.  He ends up filming the cast of Indiana Jones and the Last Crusade.  Harrison Ford, Sean Connery, Alison Doody and John Rhys-Davies are all in the shot.  I love how Steven discovers the macro setting and ends up filming close up shots of Doody, Rhys-Davies and himself.

While filming a close up of Doody she asks "why are you putting it on my mouth?"  To which John Rhys-Davies chips in with his wicked sense of humour "Just checking for herpes that's all."

The footage was uploaded to Youtube by footageforpro.com.  They say in the description:

This video was shot in Venice on the 7th August 1988, while the cast of "Indiana Jones and the last Crusade" was visiting the local police station. You can see Sean Connery, George Lucas, Harrison Ford, Alison Doody, John Rhys-Davis and Spielberg himself. I bought from the owner of the camera the permission to upload it on youtube and any other copyright he had. If you want to broadcast it on TV please contact info@footageforpro.com