New Close Encounters Documentary 'Who Are You People?' Is Essential Viewing For Spielberg Fans 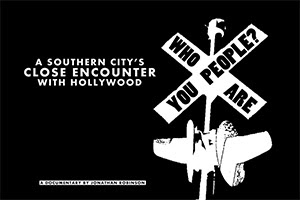 'Who Are You People?' is a wonderful documentary that tells the story of Close Encounters of The Third Kind and how the movie came to be made in the small town of Mobile, Alabama.

First time director but a veteran to Hollywood as a cameraman/cinematographer, Jonathan E. Robinson has quite simply made a gem.  Running for an hour and a half, this professionally made documentary has a shining asset and that is the residents of Mobile who tell their memories and personal experiences of working on the sets and around the production crew.  There's no commentary or annoying editing, instead Robinson has been clever, allowing the residents to carry the documentary and I am so thankful for him doing this.  It's not often a behind the scenes documentary comes along where you hear new stories on a movie that you've loved since a child but 'Who Are You People?' is one of them.  It reminded me of the excellent book, 'Jaws: Memories From Martha's Vineyard' in which Matt Taylor adopts a similar approach and allow the residents to tell their story. 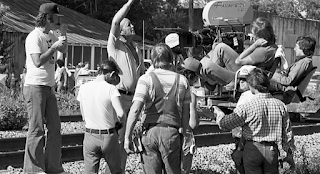 'Who Are You People?' begins it's story before Columbia Pictures decided to film in the small town of Mobile.  It reveals to us how the town was facing 20% unemployment.  One of the contribution factors was the closure of Brookley Air Base.  Rumours at the time were that President Johnson closed the base due to the general vote going the other way in the lead up to his election.  Thankfully Columbia Pictures decided that their next big movie which was going to be directed by Steven Spielberg was going to be shot in Mobile and the use of the now empty hangars were perfect for some of their scenes.  The town of Mobile welcomed the crew and cast with open arms.  The community realised that this was going to bring much needed income and jobs to the area.

What we get (in the same way as Jaws) are local residents being hired to help in the production of Close Encounters of the Third Kind.  Hundreds of local people were used for extras work and some even had lines in the movie.  Areas of Mobile were used as locations such as the Mobile Municipal Auditorium and surrounding suburbs.  One interesting fact brought up in the documentary was rather than rent a house that ultimately would be used for Roy Neary's residences the movie studio actually bought a house, allowing them to do what they like to the property.  They asked neigbours if they could shoot around the house and their gardens and even used some of the local residents in the movie.  The residents recall their time with the crew and how Columbia Pictures threw a party thanking them for their valuable help.  That party went on until four am apparently.  The documentary is full of similar stories from the people of Mobile, some telling how they met Steven Spielberg, Richard Dreyfuss or ended up getting a career in the movie industry thanks to Close Encounters. 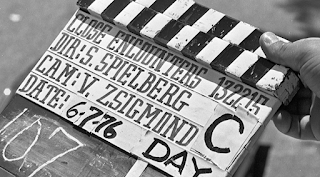 Whether you're a movie buff, Spielberg fan or just want to hear a good story of how a town was on the brink of collapse and how one movie changed their fortunes, it's all captured in this wonderful documentary.  It feels so personal.  The stories the residents of Mobile tell are wonderfully varied.  For example one person admits to stealing Steven Spielberg parking spot sign.  That made me laugh.  Another story was how the extras were extremely warm as temperatures soared on set.  Some shots went on for days if not weeks.  One day ice cream 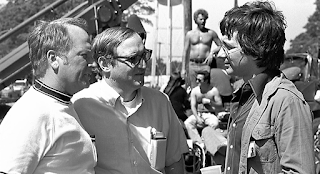 was bought for the crew and cast but not the extras.  The extras ate the ice cream much to the annoyance of the crew which caused some friction.  The next day Richard Dreyfuss bought ice cream for everyone and said he would not eat his unless the extras got some too.  A nice touch.  Other stories such as storyboards being stolen on set later to be returned, cameras being sneaked on set and ducks being flown in from California instead of using local ones were all mentioned among so many other stories.  I really hope Jonathan E. Robinson follows up with a book to accompany this excellent documentary.  Personal Polaroids and photos from the production of Close Encounters are shown throughout and would look so good in a coffee table book.

Close Encounters of the Third Kind is one of my all time favourite movies.  It's certainly one of Spielberg's finest.  So I find it only fitting that a documentary of equal quality should be made on the making of the movie.  'Who Are You People? is essential viewing for Spielberg and movie fans alike and other documentary makers should watch Robinson's masterpiece as an example of how to make a good behind the scenes documentary.

To find out more about 'Who Are You People?' head over to their Facebook group to get all the latest news and updates on the documentary.