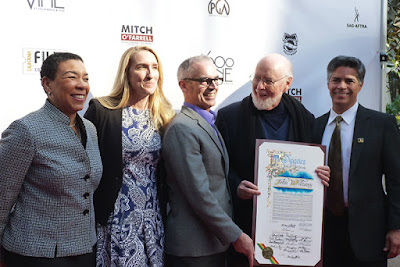 John Williams has received the Lifetime Contribution to Hollywood Award at the Made In Hollywood Honors event.  The ceremony which is in it's fifth year took place on the Heart of Hollywood Terrace of corporate sponsor 1600 VINE.   Vice President Esai Morales (La Bamba) was the evening's host.  Morales talked about Williams and his work on his most recent soundtrack, Star Wars The Force Awakens:

“Star Wars: The Force Awakens” — more nominations than any living person. “The scoring for this motion picture brought one of the largest film scoring projects of the year to Hollywood’s music community,” Morales said, “jobs for 125 orchestra members; 23 singers; more than 40 conductors, music contractors and music preparation professionals; in addition to technicians and engineers, all who collaborated to bring Williams’ brilliant score to life.”

“Recording the music for ‘Star Wars’ in Los Angeles was for me a great treat, but the people who really should be thanked for having this happen are J.J. Abrams, the director of the film, Kathy Kennedy the producer, and also Michael Gorfaine and Jamie Richardson, who worked so hard to convince the powers that this was in the best interest of the score and in the best interest of the film. I also must thank Sandy De Crescent who has put this orchestra together, and who for 40 years has established a standard and maintained this standard — and if anything improved this standard over the 40 years that she and I have been working together. I have been very, very happy with this fabulous orchestra, which is a world-class orchestra. The group of musicians who play here with us in the films are the highest world-class level of professionalism in terms of comprehension of the material, sight reading, and the execution of all of it.”

Read more about the event here.