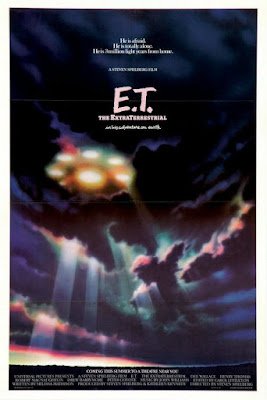 Here are 13 facts or quotes you may not know regarding Steven Spielberg's 1982 classic, E.T. The Extra Terrestrial.

1 - Spielberg never wanted to show grown-ups until the very end.  "I wanted to suggest them like in a Tom & Jerry cartoon where, when the Mom comes in you only see her from the waist down"

2 - Quote from Spielberg in 1981 - "ET is my response to the stalled space program.  If the government won't fund the space program, to allow people's imagination to soar, then all I can do is make movies that bring space down to Earth and make it more accessible to the imagination."

3 - George Lucas on Yoda - "I hadn't seen the movie and when it was completed, we had a screening for ILM which I attended.  Steven warned me there was something special in the movie for me.  So we are watching and suddenly Yoda showed up in the film.  Everybody in the audience cheered, of course, being it was an ILM screening.  I was amazed and flattered.  It was a very funny moment.

4 - The kids in the movie thought ET was real despite seeing the technicians.

7 - Elliott's father is in the movie,

12 - Harrison Ford appeared as the Principle but eventually was cut from the movie.  Henry Thomas was so excited to see his Star Wars hero, he took the day's call sheet to show his friends.

13 - Spielberg explains ET is more plant than anything else.  "He's not a mammal, or bird, or fish.  I think he's a vegetable."  He also mentions how they decided to make his insides when they glow to look more like a plant.