Review of Star Wars Before The Awakening by Greg Rucka 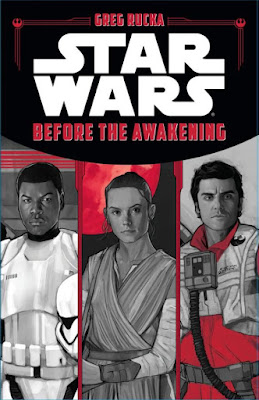 Review of Star Wars Before The Awakening by Greg Rucka

This young adult anthology of short stories about Finn, Rey and Poe in the ‘days, weeks, and months before The Force Awakens’.  Each of these stories are geared for younglings between the ages of 8 to 12.  However, long time fans of Star Wars will find each of these stories to be a good addition to what they know about these characters from the film.

Do not let the fact that it is geared for younger readers stop you from purchasing this well written series of stories.  Each of these stories each have something to contribute to the overall Star Wars saga.

Finn’s story goes behind the scenes of his training and the doubts that plague him during this training.  This story will remind long time Star Wars fans of episodes of The Clone Wars.

Rey’s story will give you a better understanding of her life on Jakku and her mechanical abilities.  In addition, it gives you some background on how she learned to fly.

Poe’s story will give you a better understanding of life before joining The Resistance, what prompted him to join and how he was given the important mission at the beginning of The Force Awakens.

Because this is geared towards younger readers, there are illustrations included that enhance each of these stories. There are not many, but those included give you a sense of the environment or the actions depicted in the stories.

Overall, I am very pleased with each of these stories and look forward to more tie in stories like these. 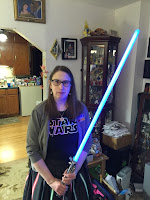 Patty Hammond (@pattyBones2) is the Everyday Fangirl from Michigan who has a disguise as a mild mannered data analyst for an Advertising firm. She has a degree in Library and Information Science and has worked in the Marketing and Adverting industry for over 20 years.  Patty is the founder and administrator of the blog EverydayFangirl.com and monthly contributor toTheCantinaCast.net. She is also an editor for one of the stories in the SFR Brigade Anthology.
Patty is a fan of many different genres and franchises, especially Star Wars. She first saw Star Wars at the Detroit premiere in 1977 thanks to her Mom who won tickets from a local TV station. Patty spent many hours acting out her favorite scenes with her brother and sisters, listening to the soundtracks and re-watching the films on TV and on home video.
You can find Patty posting about Star Wars and much more on Twitter @Pattybones2.