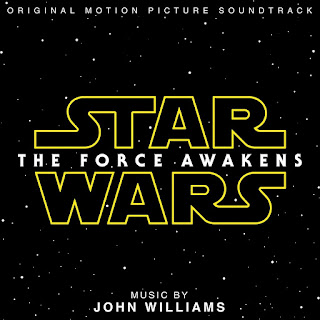 One of the most highly anticipated soundtracks for some years is out, Star Wars The Force Awakens by John Williams and The Bearded Trio are giving one away in our latest competition.  Yes we are giving you a chance at winning the deluxe version of the soundtrack which has 23 glorious tracks from the maestro.

We've made it incredibly easy to enter and the competition is available worldwide.  All you have to do is take to Twitter or Facebook and post the following:

That's all you have to do.  Nice and easy.  Now we realise that some of you are staying away from social media to avoid spoilers for the movie.  Not a problem!  If you prefer you can email Rob at The Bearded Trio with your entry.  So get posting on social media or email.

Terms and Conditions
We will pick up that you've posted and you will be automatically into the draw.  One lucky winner will be chosen randomly then be contacted by us to arrange posting.  The competition runs until Sunday 27th December 12pm GMT so get posting.  No alternative prize can be given.

Here's our unboxing video of the soundtrack