Two New Featurettes for IN THE HEART OF THE SEA @RealRonHoward 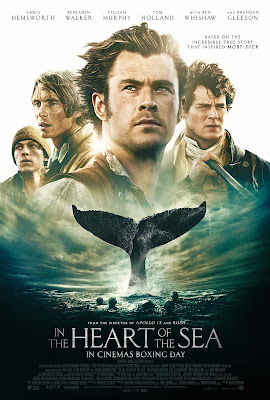 Here's two new featurettes that have been sent to The Bearded Trio for Ron Howard's latest epic movie, IN THE HEART OF THE SEA.

Both featurettes celebrate the career and achievements of the man behind this epic action adventure starring Chris Hemsworth, Benjamin Walker, Cillian Murphy and Ben Whishaw. IN THE HEART OF THE SEA opens nationwide across the UK on 26th December.


Synopsis
Oscar winner Ron Howard (“A Beautiful Mind”) directs the action adventure “In the Heart of the Sea,” based on Nathaniel Philbrick’s best-selling book about the dramatic true journey of the Essex.
In the winter of 1820, the New England whaling ship Essex was assaulted by something no one could believe: a whale of mammoth size and will, and an almost human sense of vengeance.  The real-life maritime disaster would inspire Herman Melville’s Moby-Dick.  But that told only half the story.  “In the Heart of the Sea” reveals the encounter’s harrowing aftermath, as the ship’s surviving crew is pushed to their limits and forced to do the unthinkable to stay alive.  Braving storms, starvation, panic and despair, the men will call into question their deepest beliefs, from the value of their lives to the morality of their trade, as their captain searches for direction on the open sea and his first mate still seeks to bring the great whale down.
“In the Heart of the Sea” stars Chris Hemsworth (“The Avengers,” “Rush”) as the vessel’s veteran first mate Owen Chase; Benjamin Walker (“Abraham Lincoln: Vampire Hunter”) as its inexperienced Captain, George Pollard; Cillian Murphy (“The Dark Knight Rises”) as second mate Matthew Joy; and Ben Whishaw (“Skyfall”) as novelist Herman Melville, whose inquiries into the event 30 years later helped bring the story to light.
Tom Holland (“The Impossible”) also stars as young seaman Tom Nickerson, and Brendan Gleeson (“Edge of Tomorrow”) as the same man, 30 years later.  Spanish actor Jordi Mollà (“Riddick”) is the captain of another ship, the Archimedes, who tries to warn the Essex of what may lie ahead.
Howard directed from a screenplay by Charles Leavitt (“Blood Diamond”), story by Charles Leavitt and Rick Jaffa & Amanda Silver (“Rise of the Planet of the Apes”), based on the book In the Heart of the Sea: The Tragedy of the Whaleship Essex by Nathaniel Philbrick, winner of the 2000 National Book Award for Nonfiction.
The film is produced by Joe Roth (“Oz the Great and Powerful”), Paula Weinstein (“Blood Diamond,” “This is Where I Leave You”), Will Ward, Brian Grazer (“J. Edgar”) and Ron Howard.  Serving as executive producers are Bruce Berman, Sarah Bradshaw, Palak Patel, Erica Huggins and David Bergstein, with William M. Connor as co-producer.
The behind-the-scenes creative team includes Oscar-winning director of photography Anthony Dod Mantle (“Slumdog Millionaire,” “Rush”); production designer Mark Tildesley (“The Fifth Estate”); Oscar-winning editors Mike Hill (“Apollo 13,” “Rush”) and Dan Hanley (“Apollo 13”); costume designer Julian Day (“Rush”) and composer Roque Baños (“Evil Dead”).
“In the Heart of the Sea” is a Warner Bros. Pictures presentation, in association with Village Roadshow Pictures, a COTT Productions-Enelmar Productions, A.I.E. co-production, a Roth Films/Spring Creek/Imagine Entertainment Production, in Association with Kia Jam, a Ron Howard Film.