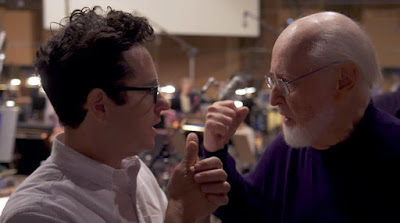 J.J. Abrams was featured in a segment about Star Wars: The Force Awakens on the news magazine show 60 Minutes. Abrams discussed the early days of his fandom after seeing Star Wars in the theater in 1977 when he was 11 years old. It captured his heart and his imagination, and that, combined with his life-long love for filmmaking, has led him to where he stands now -- just days away from the release of what could be one of the biggest films of all-time (if not the biggest overall!).

One of the highlights of the 60 Minutes segment was getting to hear snippets of new Star Wars music from legendary composer, John Williams. In a special online bonus video, we get to hear a bit more of that music -- specifically the opening music, after the crawl! -- along with some additional behind-the-scenes glimpses at the making of The Force Awakens. Also featured are brief interviews with Steven Spielberg -- who suggested Abrams to Lucasfilm's Kathleen Kennedy -- and Harrison Ford.

You can find this bonus material on http://www.cbsnews.com.