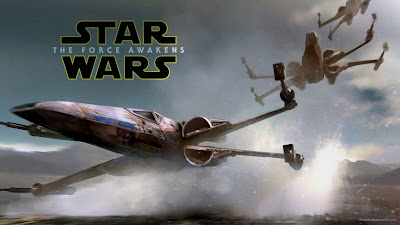 Star Wars The Force Awakens Review.  There are NO spoilers in this review.

Never has the collective anticipation for a movie been as high as it has been for Star Wars The Force Awakens.  Personally it's been a challenge not to enter the cinema with a dangerous level of hype and foresight which may influence my thoughts on the movie.  Thankfully I managed to keep it all in check as I sat down for a midnight showing of J.J. Abrams' take on a George Lucas galaxy.

To be honest I went in to my first viewing secretly hoping I would dislike the movie or at least come away with a bitter taste in my mouth.  I know it sounds crazy and looking back now it was.  I was hoping, as a George Lucas fan, that his world in the hands of someone else was going to be weaker, duller and less intense.  I was hoping I could tell the Lucas bashers 'I told you so' but I can't and I realise now how foolish and petty that idea was.  The Force Awakens is not weak, it's not dull and even though it's not as fast and intense as a George Lucas movie it still doesn't hang about.  Watching The Force Awakens is like being used to a Ferrari for all these years and then you decide to try out an Aston Martin.  They're both top cars with each one having redeeming features.

The seventh Star Wars movie explodes on to the screen, and I guarantee you will be smiling and feeling right at home as a Star Wars fan during the familiar opening for a Star Wars movie, right down to the four ellipses.  J.J. Abrams said way back when this journey began, that he was going to take inspiration from the now iconic Ralph McQuarrie artwork that we've all come to adore, and he hasn't let us down in that department.  Creatures, landscapes and even some of the action scenes are right out of McQuarrie's work, and this alone will guarantee repeat viewing to see how many you can spot.

As mentioned the pace of the movie is not as intense as a George Lucas Star Wars movie.  The editing is slower, the scenes are longer but it's still a thrill a minute.  My wife who joined me for the midnight showing had never watched a Star Wars movie (I know, right?)  But she loved it.  She gave The Force Awakens a ten out of ten and said she loved all the action in the movie.  She particularly
loved BB-8.

I actually enjoyed the longer scenes and there wasn't much jumping between them.  The performances from the cast were all glossy and slick with a special mention to John Boyega as Finn who quickly became my favourite performance and character in the movie.

Lastly the effects.  They are clean, and yes practical effects are in abundance, just like they were in the original trilogy and contrary to popular belief, the prequels.  But what is different to the prequels are the battle scenes.  Yes there is a lot of CGI for the epic scenes but the scenes are not crowded.  I will
admit watching some of the battle scenes in the prequels and to a certain point, Return of the Jedi, I found there was too much going on and my eyes couldn't keep up.  I never had that problem once in The Force Awakens and that is a big tick in my book, as this has become a bad habit for modern day action packed blockbusters.

As I said I foolishly and secretly didn't want to like The Force Awakens so to come away loving it makes it an exceptional film, and it has every right to sit in among the other six Star Wars movies.  With the intense marketing campaign for the movie I felt all 'Star Wars'd' out before watching the movie.  Now I can't wait for the next one.